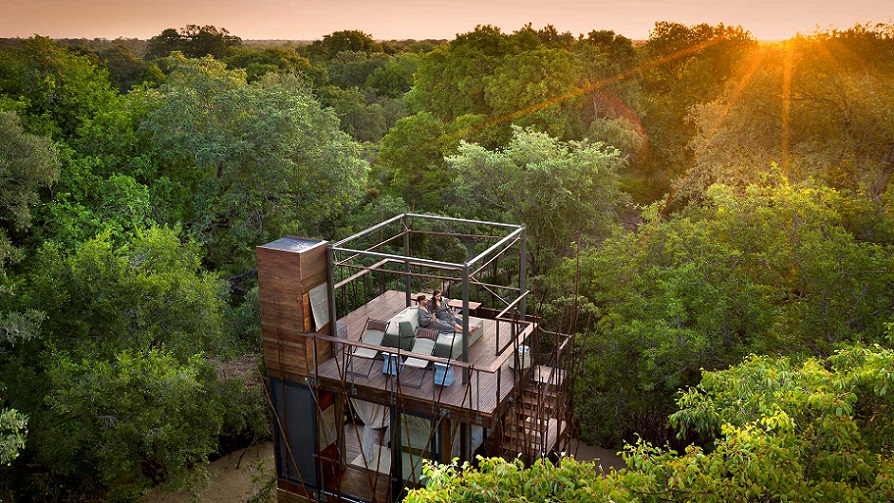 Pioneering experiential travel company andBeyond, which operates 29 lodges and camps in Africa and South America, as well as designs personalised, high-end tours around the world, literally up the ante recently with the luxurious Ngala Treehouse in South Africa. The four-storey structure, which features two sleeping areas, including a sleep-out platform under a retractable awning on the top level, stands in splendid isolation within the 14,700ha Ngala Private Game Reserve, which shares unfenced borders with the Kruger National Park.

The remote overnight retreat in the middle of the reserve is completely off the grid, far from Wi-Fi and artificial light, but still complete with all the luxurious amenities and most exclusive wilderness experience that andBeyond is known for. With the nearest camp â€“ the Ngala Tented Camp â€“ 5km away, youâ€™re also assured total privacy as you relive the adventure and magic of the wild bush.

The treehouse features an opened-planned dining area and kitchen on the ground level, while the bathroom is on the second level. The third floor has a king-size bed, and is covered and weatherproof, while the top level features a daybed where you can slumber al fresco, enjoy sundowner drinks and snacks, a picnic or midnight treats.

Available only when booking a night at either andBeyondâ€™s Ngala Safari Lodge or Ngala Tented Camp, guests can also look forward to some of the best and most exclusive game drives within the private reserve â€“ the Kruger National Park is home to the Big Five and more species of large mammals than any other African game reserve, while Ngala (meaning lion) itself lives up to its namesake, with the reserve supporting several large prides.

With nothing but the wilderness around you, the Ngala Treehouse is totally off the grid.

The third level of the Ngala Treehouse features a king-size bed and is sheltered from the elements.

An open-planned dining area and kitchen are on the ground level.

With the nearest camp 5km away, enjoy total privacy in the Ngala Treehouse.