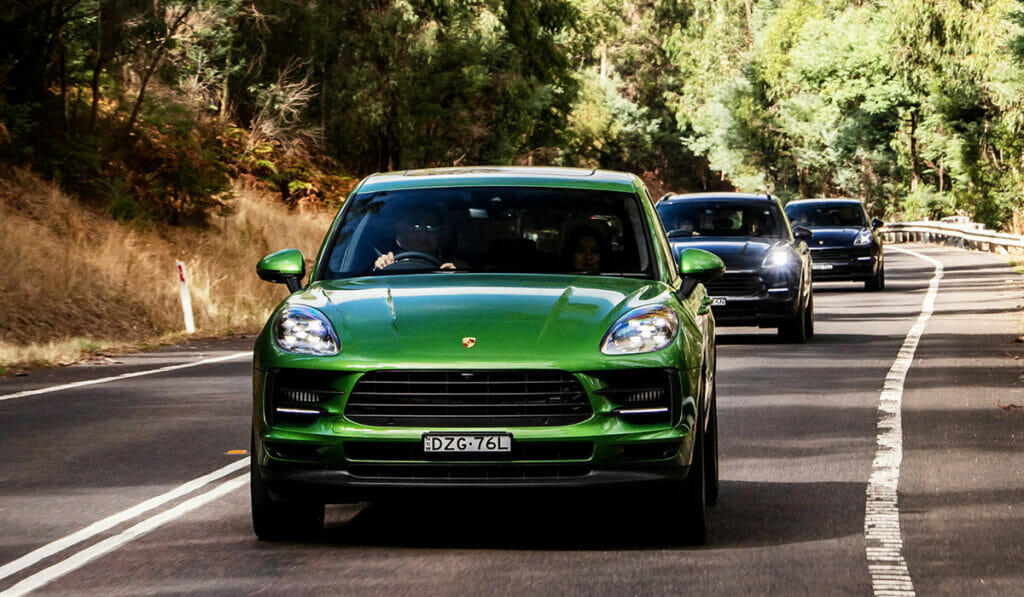 Weâ€™re near the tail end of a convoy of Porscheâ€™s new Macans. Everyone ahead of us seems to be in a hurry, pushing the cars to the edge of the speed limit on the windy roads outside Melbourne. A Sunday driver at the best of times, I was taking my time on the wheel, luxuriating in the comfort of the Alcantara and leatherette clad-seats while trying to tune into a radio station that played 1980s pop. As the distance between me and the Macans ahead lengthened, I could tell the cars behind me were getting impatient â€“ one had earlier zoomed past me in a huff.

I tapped the accelerator and the car leapt forward. We were still speeding when we reached a bend, which turned out to be an inclined hairpin turn instead. Instinct â€“ OK, panic â€“ took over as I scrambled with the wheel and brake to keep the car on the road. We swayed and bounced for a long, breathless second before the Macan righted itself and carried on smoothly. My co-driver, busy on the mobile phone all this time, muttered indistinctively before looking up to glance at the odometer. â€œI actually thought we were going much slower than that,â€ she said before turning back to her phone.

Which is the twist in this tale: while the new Macan exudes inexorable coolness in terms of look and feel, underneath that laidback vibe is pure Porsche, with all the attendant power, poise and supreme handling that youâ€™ve come to expect from the marque. Say what you want, this SUV might look refined but itâ€™s much, much more than just a car to take to the Sunday market.

The optional Chrono Sport Package comes in a mode switch integrated into the steering wheel.

Porsche introduced the Macan in 2014, taking its name from the Indonesian word for â€˜tigerâ€™. The carmakerâ€™s first compact SUV has been a resounding success, with more than 400,000 units sold so far. It is, by far, Porscheâ€™s bestselling model in AsiaPacific, accounting for nearly 30 per cent of its sales, with Malaysia being the second biggest market.

Porsche didnâ€™t need to reinvent the wheel when it came to updating the Macan. While most of the features that made it such a popular model remain, the marquee has comprehensively upgraded the second generation in terms of design, comfort, connectivity and driving dynamics. In line with the Porsche design DNA, the Macan now features a three-dimensional LED light panel in the rear. More eye-catching is the new 10.9in touchscreen â€“ an increase from the previous 7.2in â€“ of the Porsche Communication Management, which now include new digital functions like intelligent voice control, Voice Pilot, which allows you to input navigation destination as well as controlling music and vehicle functions.

A leaner design gives the new Macan an even more distinctive and confident appearance, with its sports car characteristics further underlined by the horizontal lines at the front and rear. The headlights have been completely redesigned and LED is now standard. The fog lights have been removed â€“ its function has been incorporated in the new LED panel â€“ giving the front a wider look.

With everything laid out neatly, itâ€™s easy navigating the new Macan.

POWER IN YOUR HANDS

Two variants of the new Macan are currently available (the car officially launched in Malaysia last month) â€“ the Macan and the Macan S. The former is powered by an enhanced 2.0-litre turbo-charged four-cylinder engine that produces 185kW and a maximum torque of 370Nm. This means that its speeds to 100km/h from a standing start in 6.7 seconds and a top speed of 227km/h. The Macan S, on the other hand, is where things get more interesting: under the bonnet is a newly developed V6 engine with a 3.0-litre displacement and twin-scroll turbocharger in central turbo layout. This powerplant has a power output of 260kW and torque of 480Nm, going from zero to 100km/h in just 5.1 seconds for a top speed of 254km/h.

Both variants employ Porscheâ€™s seven-speed dual-clutch transmission (PDK) and PTM all-wheel drive that has been adapted to fully exploit the potential of the new engines. In Sport mode, the transmission is now even more responsive and allows very fast gear changes, while in Normal mode, the PDK shifts rapidly and comfortably to higher gears. The optional Sport Chrono Package comes in a mode switch â€“ first used in the 918 Spyder â€“ integrated into the steering wheel. It includes a Sport Response button in the middle of the mode switch, which boosts the responsiveness of the Macan for 20 seconds. With just a push of the button, accelerator pedal commands are more spontaneous, achieving optimum acceleration more quickly. Another option is the GT sports steering wheel in leather or Alcantara, which has been adapted from the Porsche 911.

Having been introduced in 2014 with a chassis that is typical for a sports car, the Macan has always balanced everyday comfort with sporty driving dynamics. Porsche, however, has raised the bar with detailed improvements as well as a completely new setup. Spring forks on the front axle, for example, are now made of lighter aluminium alloy that helps the Macan steer even more precisely while suspension has become more comfortable. Handling, as well, has been designed to be more neutral, making the vehicle behave even more like a sports car than ever, while the new generation tyres have been especially tailored to the Macanâ€™s specific driving characteristics.

Taking a peek at the engine underneath the new Porsche Macan

The biggest enhancement inside the new Macan is the aforementioned 10.9in Porsche Communication Management, which blends harmoniously with the other functions in the elevated centre console. Its larger interface has also, helpfully, made it possible to reduce the number of buttons of the console. The air vents now come with metal trim elements and are now integrated horizontally in the centre console under the new PCM.

Finishing is as expected of Porsche: seat surfaces are covered with Alcantara, while seat bolsters are in high-quality leatherette. The steering wheel, selector lever and armrests are finished in leather, and, of course, additional full-leather interiors in various colours are also available for further personalisation. The Macan Premium Package offers additional comfort and luxury features, such as 14-way power seats including memory function for both driver and front passenger, comfort lighting package, Power Steering Plus, Park Assist including reversing camera, automatic dimming mirrors, and BOSE Surround Sound System. What is standard, however, is the particle/pollen filter with anti-allergen coating.

The interior of the new Macan is luxuriously appointed with leather and Alcantara.

The very fact that the Macan is a Porsche raises a certain kind of expectation. It may look like a normal compact SUV but it behaves anything but. Behind that relaxed exterior is all the traps of a sports car. More importantly, it is a Porsche sports car and, here, plenty of efforts have gone into making sure the Macan performs on the road.

And it really does. Right off, it is a remarkably easy drive. Handling is superb â€“ as we discovered in that scary hairpin moment â€“ and the carâ€™s responses are exemplary regardless of what drive mode youâ€™re in. The Macan S, of course, has the edge where power is concerned but the base Macan is swift enough that you donâ€™t feel left out.

Itâ€™s also easy to appreciate the balance of sportiness and comfort. The interiors are indulgent and the new PCM is intuitive and easily navigated. No road trip in this car will ever feel too long. With the convenience it affords and the comforts it offers, and all that back by a performance that is so very Porsche, it is little surprise that the Macan is Porscheâ€™s bestselling car in Asia-Pacific.

Itâ€™s also the unexpected details that really catch my eye: my favourite is the quaint analogue odometer and clock that seats on top of the central console in the Macan S. It doesnâ€™t do much more than mark the speed and tell the time. It doesnâ€™t make your drive more comfortable or exciting. Itâ€™s just a visual cue, a little touch of class â€“ the cherry on top of a very, very fine cake.