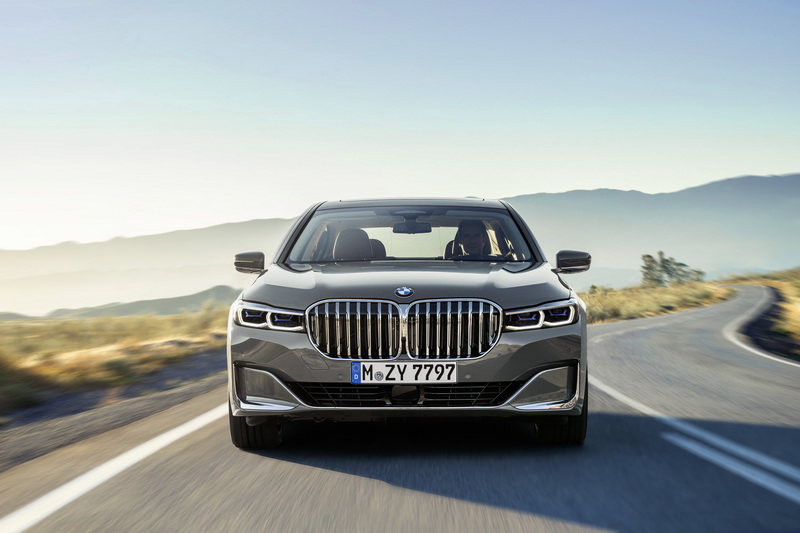 The coastal roads of Algarve, Portugal, with its fabulous ocean vistas and winding drives fringed by orange trees and fields of lavender on either side, is as pretty and picturesque a sight as you can imagine.Â  Portugalâ€™s southernmostâ€”and arguably most beautiful areaâ€” is the perfect setting for a first drive and unveiling of BMWâ€™s new 7 sedan and 8 convertible series earlier in the year.

While the launch sees two different BMW series, each with its own unique character, the shared traits of power, comfort and intelligence lie uncompromised. The sophisticated ease of the new 7 series provides luxury, power and smarts for both passenger and driver.

Equally, the 8 series draws discernable buzz from petrolheads, collectors and the one percent alikeâ€”the return of the now-legendary series from the 90s has a new incarnation in the form of the M850i Coupe with its new XDrive configuration.

First on the to-do list for both cars, get acquainted with BMW Intelligent Personal Assistant. The voice-activated AI attends to everything from getting the music started to navigating your drive. As with all interactions, it helps when you talk to â€œBMWâ€ in a calm manner, as demonstrated by my co-driverâ€” raising your voice will only serve to garble your accent further.

Also essential, your preferred ambient lighting configuration to add to the drive experience. In this instance, an glowing hot pink for the 8 and a cooler shade of electric blue for the 7.

The writer at the wheel of the new M850i Coupe.

Limited to only 400 vehicles worldwide, the M850i Coupe presents an exhilarating drive with a select group of international journalists given carte blanche to wind around the coast and tear down the countryside with wild abandon.

The promise of a fierce zip along Algarve is reinforced by its feline aesthetics. Notably, by the aggressive looking large, single-piece low-set kidney grille, jutting front apron with large air intakes, an additional front spoiler to further minimise lift at the front axle, the slimmest headlights of any BMW model (which comes with optional and even more precise Laserlight technology) and 20â€™ mixed sized tyres. Two character lines along the flanks, slim LED lights that extend well into the flanks and two sets of trapezoidal exhaust tailpipes help emphasise the carâ€™s character from the side and rear.

The M850iâ€™s employment of aluminium, magnesium and carbon fibre-reinforced plastic (CFRP) makes it a decidedly lightweight construction balanced by a low centre of gravity and even weight distribution. A V8 petrol engine with eight-speed Steptronic transmission and acceleration of 0-100km/h in 3.9 seconds with a top speed of 250km/h and maximum torque of 1800-4600rpm gives the driver plenty to play with.

The smooth automated drop down of the top is a great prelude to the sort of drive you need to be experiencingâ€”open top driving and excellent driving weather is a must. Put those sunnies on, step on the gas and feel the wind in your hair as you zip in and around the many little villages dotted around the countryside in Merino leather-trimmed comfort. Try not to scare the goatsâ€”or the little old ladyâ€” trying to cross the path.

Depositphotos_149636242_ds_resize
main square of the historical old town of Faro
traditional buildings of the tourist area of Faro, Portugal

When in Sport Plus mode, the M850i is exhilaratingâ€”from its low growl to its extremely sticky cornering, this is sheer driving joy and the mode employed for much of the drive. In Comfort mode, the suspension is decidedly more cushioned and luxuriousâ€”but this driver found it held back the carâ€™s full potential.

Speeding through the countryside may give one less of an appreciation of Algarveâ€™s incredible flora and fauna but there are more than a few opportunities to make up for it. Case in point, lunch break locations that lend stunning backdrops to the carâ€™s own handsome design. At Faroâ€™s charming old town centre, we are waylaid by the promise of a table laden with fresh seafood, with everything from salada de polvoâ€”a salad of octopus, to chocosâ€” squid fried in garlic and its own ink toÂ caldeiradaâ€”the local rustic fishermanâ€™s fish and shellfish stew.

A jaunt around Faroâ€™s old town has photography enthusiasts snapping pictures of the Igreja do Carmo located on the Largo do Carmo square and known for its baroque faÃ§ade as it is for its fascinating, if macabre, chapel, of monkâ€™s bones exhumed from Faroâ€™s once overcrowded cemetery.

Less grisly sights can be fully appreciated on the second day of the drive. Guerita Terrace in Altura is located on a cliff over which a spectacular view of Praia Verde, one of Algarveâ€™s most beautiful beaches, and the calm sea beyond presides. This is another delightful lunch stopover for journalists experiencing the new 7 series.

Itâ€™s more than tempting to catch forty winks under the shade of the few gazebos dressed in billowing white cotton here at the restaurant but lunch is already being served. Guests sample an array of dishes including a delectableÂ torricadoÂ of crusty bread with a healthy lash of extra virgin olive oil served with a novel twist of orange, as well asÂ pate de sardinha, the sardine pate so beloved by natives. Enjoy it with an ice-cold Coke (no drinking and driving!), and all is well with the world.

Journalists arriving in Faro have already experienced the buttersmooth ride of the newly designed 7 series, having been ferried from the airport by chauffeurs who are more than amused by our gaping admiration of its luxurious interior and bump-free journey.

There is certainly no shortage of admirers for the sedan. After lunch, we come out to a couple of passersby circling around the car in sheer awe. Perfectly understandable considering the 7 series has seen an extensive design refresh at the front, being 50mm taller and adding a more powerful visual presence to its overall aesthetics.

The sedan also sees a sharper, more coutoured bonnet and a larger BMW roundel but it is the single piece kidney grille occupying a larger 40% surface area fitted with slimmer headlights that up the style quotient.Â  Similarly, the 3-D rear lights are also decidedly slimmer than its predecessor for a sleeker appearance. Other aesthetic touches include decorative chrome strips around the nose of the car for added visual impact.

Large air deflectors feature in the lower section of the front apron to help guide the rush of air more efficiently to the brake air ducts while Air Curtains help minimise turbulence around the wheel arches. Air Breathers are also integrated into the newly designed front wings.

This is a rather stately ride and the temptation to let oneâ€™s co-driver employ his best Alfred Pennyworth while you lounge in the backseat is hard to resist. After allâ€”and letâ€™s be honest hereâ€”the chances of you actually driving this large sedan would be very slim.

Sitting in the back allows you to fully appreciate the extremely well-appointed accouterments that are part of the vehicle. Feel the smoothest, softest touch of quilted Nappa leather, for one. The exclusive craftsmanship extends to the interior trim in either dark American Oak with a metal inlay or Poplar grain with a high-gloss metallic grey.

Once in and over an extended drive back to our resort, one can truly appreciate the sedanâ€™s optimised acoustic comfort. Thicker glass (Comfort Glass comes as an option, depending on the model), rear arch wheels, B-pillars replete with optional Ambient highlight and seatbelt outlet covers in the rear, and the latest version of the BMW Touch Command rear-seat control have been carefully thought out to cocoon the passenger in sheer luxury and quiet elegance. Of course, if one would rather not sit and lounge, there is the optional rear seat entertainment complete with 10â€™, full-HD touchscreen displays and a Blu-ray player.

The comfort extends to the driver of the 7 Series as well, what with a Nappa-wrapped steering wheel and a lighter touch on the pedal which justifies our choice of the plug-in hybrid model with a six-cylinder inline engine. Buyers can also consider the BMW M760Li xDrive that comes with the powerful 6.6l V12 engine with fuel consumption at 12.5 â€“ 12.4 l/100 km and a gasoline particulate filter to minimise emissions. There is also a newly developed 4.4l V8 engine version with a maximum output of 60kW/80hp with fuel consumption at 9.6â€”9.5l/100km; for the 750l xDrive.

The 7 Series diesel models will not be available to Malaysian buyers. The ride on the hybrid model is virtually silent thanks to its all-electric driving train with its advanced high-voltage battery. Thereâ€™s no mistaking its power with a combined output of 290 kW/394 hp with the Driving Experience Control switch set to SPORT mode.

Consumption for three electric models, the BMW745e, BMW745Le and BMW745Le XDrive, is between 2.6 and 2.1 litres per 100 kilometres, with CO2 emissions at 59 â€“ 48 grams per kilometre, and combined electric power consumption is 16.3 â€“ 15.0 kWh per 100 kilometres. The three models achieve an electric range between 50 and 58 kilometres (31 â€“ 36 miles). This means that despite the rather imposing size of the vehicle, a surprisingly light and fast yet fuel efficient drive can be expected.

This driver, for one, is especially impressed by how the car can navigate sharper turns off the road while staying calm and collected. Electronically controlled dampers and two-axle air suspension with automatic self-levelling (with optional Integral Active Steering and the Executive Drive Pro chassis systems for all models except the plug-in hybrid variants) makes it all seem easy.

Either ride only proves that the BMW 7 and 8 series could not be more different in terms of character yet its shared heritage and commitment to the drive remains the same. That alone counts for 10s in this driverâ€™s books.