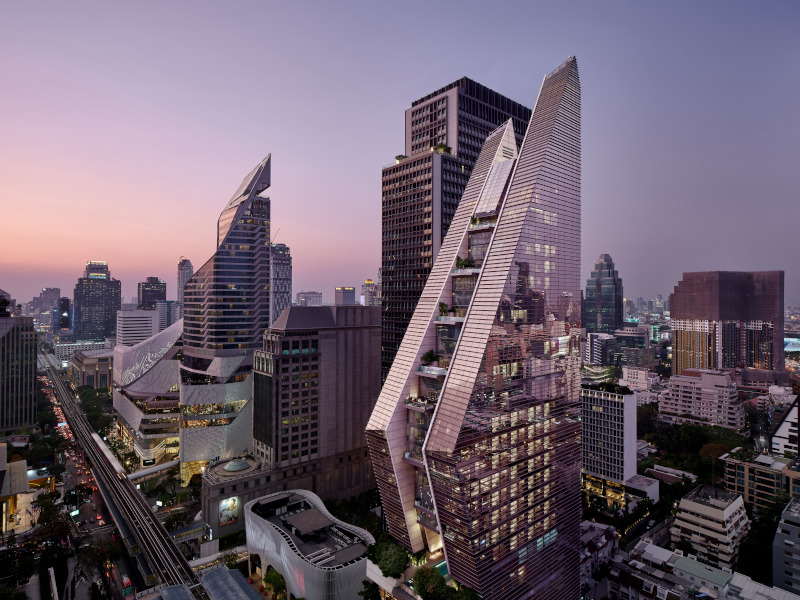 Here are some newly opened hotels you should check out should you find yourself in Norway, Mexico, Austria or Thailand.

Standing out from the crowd in the modern ‘Land of Opportunity’, Amerikalinjen is a boutique hotel in Oslo that sells the American Dream to you on a global platter. Housed in one of the city’s most famous buildings, the 20th century former headquarters of the Norwegian America Line lives on one of the busiest streets of Norway, Jernbanetorget Square. The hotel in itself is a creation of contradictions with modern and contemporary decor merged with the building’s original wide corridors, high ceilings and paned windows for a Grand Neo-Baroque hotel with a state of the art twist. With 122 rooms and a series of social spaces for guests, Amerikalinjen also boasts a vast array of eateries – Atlas, the all-day brasserie, Haven, an open-air courtyard that serves coffees and pastries for a light meal, Pier 42, a bar helmed by Head Barkeeper from the Norwegian America Line, Kåre Breiby, and Gustav, an intimate basement club meant to embody the famous jazz speakeasies of New York. A space that shares Norway’s localised touch for an international palate, Amerikalinjen is a gift that keeps on giving.

Lying in the sand with plenty of sea and sun is always guaranteed to lift your mood, but if exploring the local scene and traditions of Mexico’s best kept secret interests you, then Hotel Amapa might just be your choice. The 55-room hotel, nestled in the old quaint town of Puerto Vallarta, is modern, minimalistic and Mexican in the most memorable of ways. With a contemporary yet traditional décor done up by local bespoke craftsmans, one can find a celebration of Mexico in every nook and cranny of the space. Its proximity to some of Puerta Vallarta’s top restaurants, bars, beaches and hikes, as well as the vibrant street life found right outside the hotel doors, makes Hotel Amapa nothing short of first-class with its laid-back yet chic vibe, complemented by the cultural traditions of Mexico. The backdrop of the Sierra Madre Mountains and the Pacific Ocean merely sweeten the deal for the vistas that Hotel Amapa has to offer.

Stepping into a space that is meant to inspire, cultivate and create, the Andaz Vienna Am Belvedere has certainly carved a niche for itself. Located in the Austrian capital of Vienna and situated in close proximity with other Austrian attractions such as the Museum of Military History and the Naschmarkt, the hotel is fitted 303 rooms and suites, a 2,200 sq m conference area, ballroom and several restaurants and bars to accommodate both gourmands and guests who would like to gain the full Andaz experience. As homage to Belvedere Palace, the famous historic museum in Vienna, and Prince Edward Savoy, one of the leading developers of the museum back when it first opened, Andaz Vienna Am Belvedere is decorated with contemporary art and designs by both local and foreign artists to showcase the rich culture and appreciation of the arts that has landmarked Austria as one of the major players in shaping the way the modern world perceives art.

WAKE UP AND SMELL THE ROSEWOOD

A striking silhouette backdropped against the Bangkok skyline, the newly launched Rosewood Bangkok lies in the heart of the city’s prime central business and retail district, and has already garnered a name for itself. Architecturally structured to embody the wai , the Thai greeting, Rosewood Bangkok is certainly welcoming in all manner of ways. From the 10-storey indoor waterfall to the 159 hotel rooms and three ‘signature houses’ with private pools and terraces to the rotating ‘Art Connection’ exhibit that showcases local Thai artists, the vibrancy of Thailand is certainly felt in Rosewood Bangkok. The hotel also boasts of four ingenious restaurants and bars, beginning with the delightful Lakorn European Brasserie, Nan Bei, which serves up the delights from the northern and southern parts of China, Lemon’s, a speakeasy bar, and G&O, the first organic restaurant in a hotel.