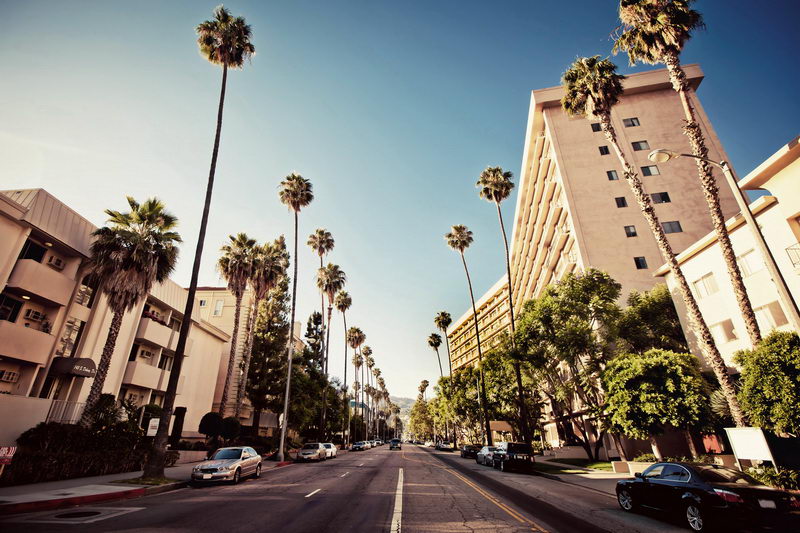 Whether it is old school Hollywood, the charm of the Caribbean, peaceful French Riveria or bustling markets of Morocco; these destinations will never get too old to visit again.

Whether your love for the glamour of the past comes from watching Marilyn Monroe drape herself in diamonds whilst calling them her best friends, or from Carey Grant travelling across continents with Grace Kelly by his side, there is no denying that Old Hollywood certainly shaped a lot of what we view as vintage glam. Should you find yourself in the star-studded streets of Los Angeles looking to lift the curtain into the past, we recommend checking into either the Beverly Hills Hotel or Chateau Marmont.

Though both hotels are located on Sunset Boulevard and closely linked to celebrities, the Beverly Hills Hotel was developed in 1912 before the city was created and continues to deliver both vintage and contemporary décor that remains true to its past. The Beverly Hills Hotel has also recently added two new bungalows, inspired by Marilyn Monroe and Howard Hughes, who were both frequent patrons of the luxury lodging. Chateau Marmont, through reputation alone, is synonymous with glamour. Modelled after a royal retreat in France, Chateau Marmont has housed plenty of the greats such as F Scott Fitzgerald, Annie Leibowitz and Tim Burton. Many movies have referenced the Los Angeles icon with its latest feature being Damien Chazelle’s 2016 hit, La La Land.

For a true dining experience, try out Pacific Dining Car in Westlake, which opened in 1921. The restaurant is open 24 hours a day and looks like a train riding car, hence the name. Mae West used to be a frequent customer if that sweetens the deal. Or perhaps you would be more interested in Musso & Frank Grill that remains unchanged since 1919, when it opened. From the vintage phone booth in the corner of the restaurant to the strong martinis that would have you seeing old starlets come to life, the Golden Era of Hollywood still lives strong through the undercurrents of Los Angeles.

The largest island in the Caribbean with over 300 gorgeous beaches to choose from and near constant cheerfully sunny weather, it truly is a wonder how Cuba slipped the sight of travellers for a period of time. From Santiago de Cuba to Havana and Trinidad, the old school charm of the ‘Pearl of Antilles’ remains strong in all of its cities and towns, and a visit to any of its locations will show you a nation seemingly untouched by time. The proud host of a melting pot of architecture, including styles such as Art Deco, Colonialist, European and Art Nouveau, the influences of the past all coexist in harmony creating a unique skyline like no other. For an authentic experience of the country, it may be best to stay in casas particulars, or ‘private houses’, which are bed and breakfast in nature and offer a private homestay. If your preference lies in hotels, however, you would do well to check into Hotel Habaguanex Santa Isabel, a former mansion of the Santovenia counts that was turned into a hotel in 1867. Fitted with 19th-century décor and located in the town square of San Cristobal de la Habana, this historical hotel will make Old Havana seem like a modern utopia in comparison.

Havana is a very artistically inclined city, with a myriad of exhibitions and art and craft markets occurring daily, from the Almacenes San José Artisans’ Market to the hip, multimedia platform exhibits at the Fabrica de Arte Cubano, also known as the Cuban Art Factory. A recommended end to your day would be to head on to La Bodeguita del Medio and order up a mojito. The restaurant-cum-bar once entertained such elites as Ernest Hemingway, Pablo Neruda and Nat King Cole, so you are definitely kept among good company.

Blue is certainly the warmest colour on the French coastline of Côte d’Azur. Welcoming and aesthetically appealing with its drop dead gorgeous skylines and vistas, the French coastline is once again reprising its role as one of the top travel destinations of the year. Lacking a boundary for where it ends and begins, it has been estimated that the French Riviera spans from either the cities of Toulon or Cassis to the French-Italian border. This allows for travellers to visit the other romantic cities of France for a short trip amidst their lounging on the promenade of the Riviera.

It’s one thing to view the sights of the Côte d’Azur from the Promenade, which is heavily recommended, but it is another altogether to hire a yacht to cruise down the coastline. Visit the bigger cities like Nice and Cannes or countries like Monaco, and maybe even stop at the islands nearby for a mini getaway. Or, if art and culture are more your speed, famous painters Pablo Picasso and Henri Matisse were common sights en route between Cannes and Nice, so visiting their favoured haunts might imbibe you with some of their artistic vision. Should you be around Côte d’Azur during the warmer seasons, it would be remiss to not at least visit the star studded and socialite scene of St Tropez, to if not bump into an illustrious personality, then to get that St. Tropez tan that everyone dreams of. A trip around the coastline is sure to expand your mind on all things French and host a deeper appreciation for one of the unspoken wonders of the world.

Dynamic energy, a developing entrepreneurial scene as well as a thriving cultural confluence of the Middle East, Africa and Europe, Marrakech is both enigmatic and engaging in its beauty. The largest city within the Kingdom of Morocco, Marrakech, also known as the Red City, is renowned for its beautiful mosques, markets and museums. One of the city’s most famous destinations is Jemaa el-Fnaa – during the day, it hosts a plethora of stalls, such as henna artistes, snake charmers and local entertainment, while the night sees it transform into a capital of traditional foods and drinks, all locally made and sourced.

The Musée Yves Saint Laurent Marrakech, located on a corner lot in the city, is one of the latest additions to this entertainingly chaotic city. While it includes a temporary exhibition space, photo gallery and white-themed cafe called Le Studio, this 21st-century architectural masterpiece also presents a rotating exhibit of 5,000 clothing items, 15,000 accessories and hundreds of thousands of sketches and documents created by Saint Laurent himself.

There is also the Museum of Moroccan Art, or Dar Si Said Museum, that presents the cultural history of this colourful city. It is also imperative that you not leave Marrakech without trying out the Moroccan hammams. Similar in nature to Turkish baths, hammams are essentially a steam room where people go to bathe, but it is an interesting take away experience, henna tattoos and snake charmers aside.