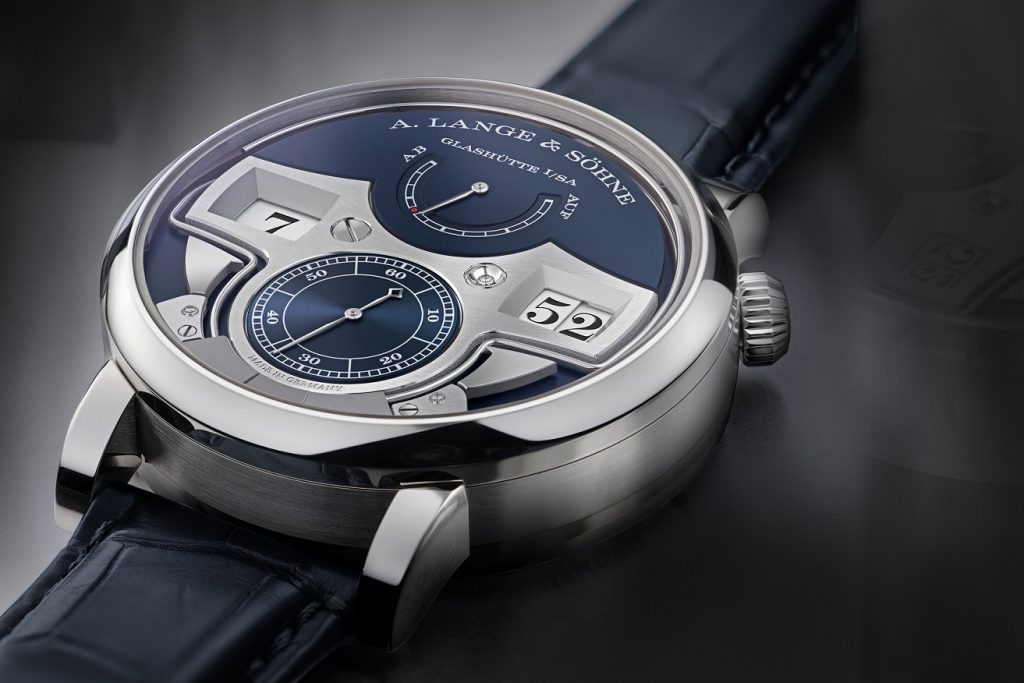 First presented in 2015, A Lange & SÃ¶hneâ€™s Zeitwerk Minute Repeater remains the worldâ€™s only watch that combines a mechanical jumping numerals display with a decimal minute repeater. The complicated timepiece â€“ it takes several month just to assemble it â€“ has only been available in platinum but, now, five years after its debut, it comes in a limited 30-watch edition in white gold with a deep-blue dial. The new edition, debuting at Watches & Wonders 2020, comes in a 44.2mm white-gold case with a matching deployant buckle, while the deep-blue dial in solid silver contrasts beautifully against the rhodiumed German silver time bridge. A blue hand-stitched leather strap completes the timepiece.

The Zeitwerk Minute Repeater features a totally new interpretation of the classic complication. Its striking mechanism â€“ it sounds 10-minute intervals instead of quarter-hours with double strikes â€“ is a convincing logical complement to the â€˜digitalâ€™ display of the time. As soon as the striking mechanism is activated with the repeater pusher at 10 oâ€™clock, it sounds the time as indicated on the dial. At 7.52, for example, the hammer on the left strikes the low-pitched gong seven times. Five double tone strikes indicate the elapsed 10-minute intervals, before the right-hand makes two strikes for the elapsed minutes.

In developing the striking mechanism, Langeâ€™s engineers relied on the basic principle of the jumping numerals mechanism, where the time is displayed by an hour ring and two minute discs. This configuration makes it possible to sample the number of strikes to be executed â€“ separately for the hours, ten-minute intervals and minutes â€“ directly on the snails that are connected to the mechanical display elements. At the same time, enlarged sampling surfaces enhance the reliability of the striking mechanism. This assures that the acoustic time always corresponds to the displayed time.

The Zeitwerk Minute Repeater also features a unique pusher mechanism for triggering the repeater. Since the power for the striking mechanism is delivered by the mainspring barrel, there is no need for the more common slide to tension a separate spring. The absence of a large lateral opening in the case eliminates a source of acoustic disruption, improving the sound quality, and since a pusher can be sealed, the timepiece is water-resistant to 100ft.

The patented jumping numerals mechanism consists of three discs, advancing from minute to minute with a gentle click, until, at the top of the hour, all three numerals discs simultaneously jump forward by precisely one increment.

The Zeitwerk Minute Repeater is powered by the manufacture calibre L043.5, which is composed of 771 parts and completed by hand. It has a power reserve of 36 hours when fully wound if the striking mechanism is not activated.