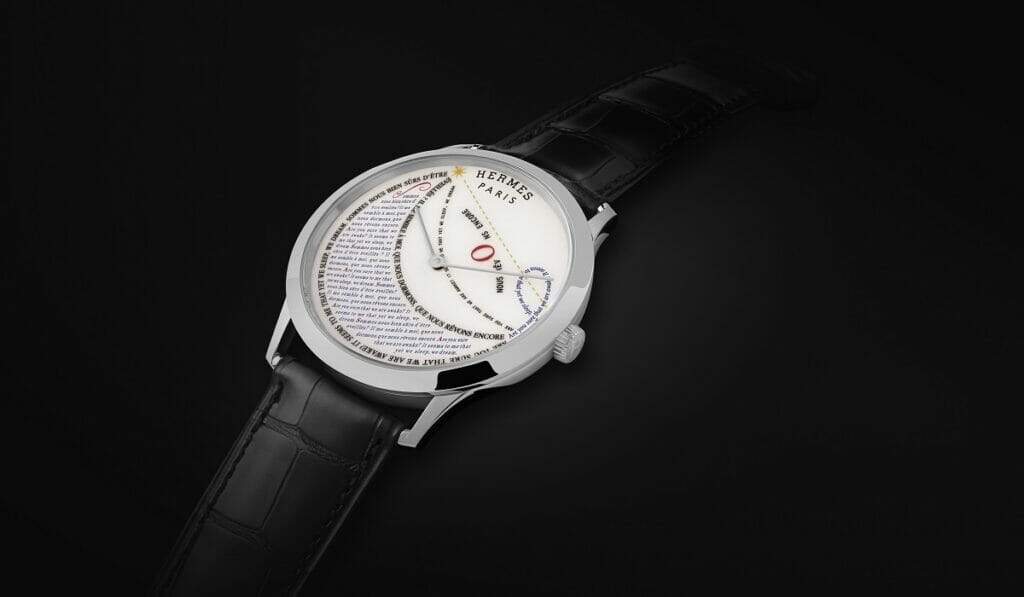 The Slim dâ€™Hermes Carre de Reve comes in a very limited run of only six pieces.
Friday, May 3, 2019 By Editors

Itâ€™s been three years since the Slim dâ€™Hermes galloped onto the scene with a completely original typeface designed by award-winning graphic designer Philippe Apeloig, jazzing up a simple three-hand watch with snazzy Art Deco-inspired numerals. The love affair with typography continues this year as La Montre Hermes unveils the Slim dâ€™Hermes Carre de Reve, a watch with a face decorated entirely with text.

In keeping with the brandâ€™s 2019 theme of dreams, the colourful words are arranged in the shape of a moon, and its design was based on the Hermes Carreve scarf. When poems are arranged to form an image related to the poem, theyâ€™re known as calligrams, and they were first used by French poet Guillaume Apollinaire in the early 20th century. But, instead of using verses by Apollinaire, Hermes decided to use passages from Shakespeareâ€™s A Midsummer Nightâ€™s Dream in both English and French.

Along with the unconventional dial design, Hermes also incorporated the fascinating techniques of engraving and enamelling on sapphire crystal to add subtle relief and depth to the words. Several layers of enamel were first applied manually to the back of a sapphire disc and successively fired. Some of the text was then engraved on the bottom of the disc, while the rest of the text and decor were engraved on the top. The engraved parts were then filled with coloured varnish â€“ a painstaking process that took several hours of work by hand under a microscope. Little wonder, then, that the watch is available only in a numbered, limited edition of six pieces.

Loved letters
Two more watchmakers show that they, too, have a way with words.

Yes, HYT is still making unconventional watches that use coloured and clear liquids to tell the time, but, this year, the brand has added context to the concept. The title words of the brandâ€™s new H2O â€œTime Is Fluidâ€ are erected like miniature sculptures around the flange for both the 18K yellow gold and stainless steel versions. Similarly, the also-new HO â€œTime is Preciousâ€ has its name engraved into the sides of its stainless steel case.

Possibly afraid that its wearers would forget what tenets Greubel Forsey live by, the independent watchmaker has, not infrequently, engraved bits of its philosophy all over its watches. The latest to feature this motif is the Art Piece Edition Historique, which features the brandâ€™s values micro-engraved onto almost every centimetre of the raised portion of the dial (including the flanks), as well as on the case sides.