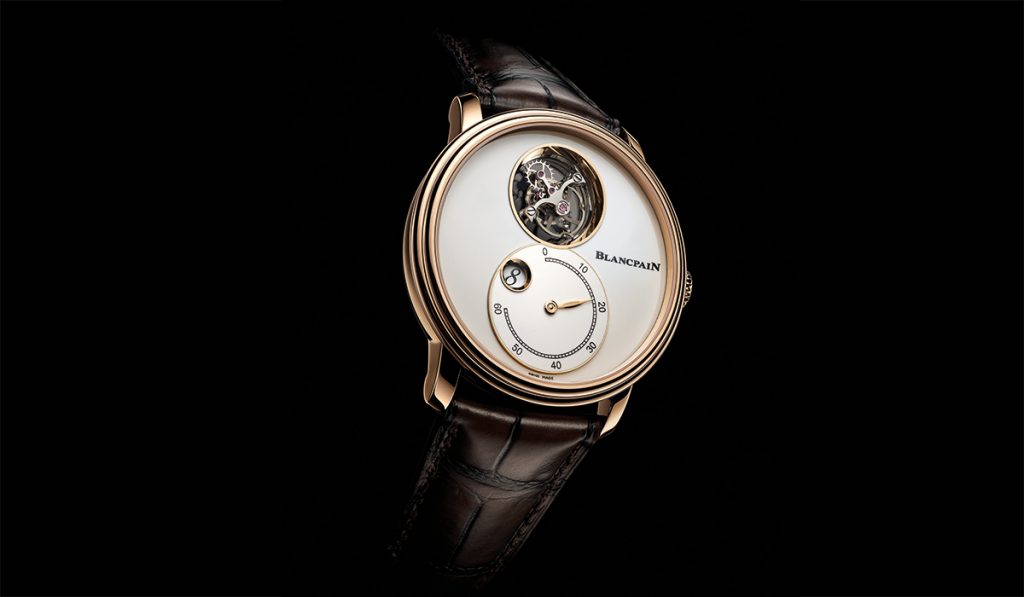 The complicated-sounding name of Blancpainâ€™s Villeret Tourbillon Volant Heure Sautante Minute Retrograde might belie the fact that itâ€™s a time-only watch. As its name details, however, the watch presents the time in atypical ways â€“ its features include a flying tourbillon, as well as jumping hour and retrograde minute displays. The flying tourbillon here doesnâ€™t simply do away with an upper bridge; it also uses a transparent sapphire disc for its lower bridge, effectively creating the illusion of the regulating organs beating while suspended in thin air. Technical content aside, the watch also sports a grand feu enamel dial, produced in-house by Blancpain, that harks back to the Villeret collectionâ€™s display of artistic crafts.

This watch looks like a dressy, formal timepiece, but isnâ€™t quite so either. Many subtle twists reveal themselves upon a closer look. Note how the flying tourbillonâ€™s aperture and the retrograde minute display are vertically arranged, for instance, while subtly overlapping with polished rims of different thickness. Likewise, the digital hour display is slightly off set to break the symmetry â€“ a fitting touch given the somewhat unusual time display format. The finishing touch here is the grand feu enamel dial, which lends the watch a stately air.

The Villeret Tourbillon Volant Heure Sautante Minute Retrograde will fit a larger range of wrist sizes than its 42mm red gold case might suggest, thanks to its curved and fairly short lugs. The watch will, however, seem a fair bit larger than it actually is. This is largely an effect caused by the double-stepped bezel and the white enamel dial. For those given to frequently checking the time throughout the day with a quick glance at their watch, reading time o this unusual display might take a little getting used to.