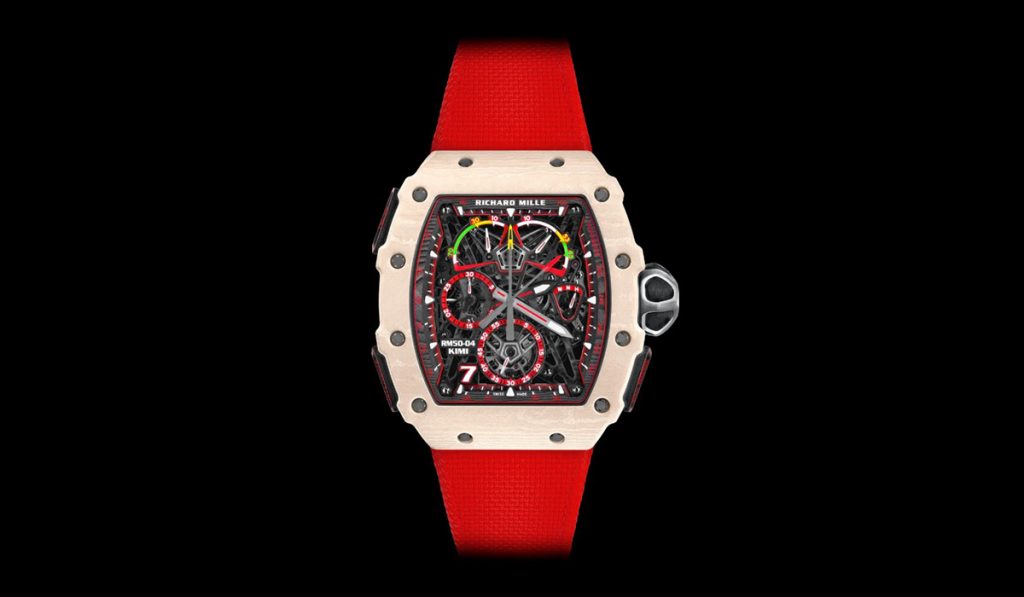 Whether you are a race fan or not, there is no denying that Richard Mille has achieved something special with the RM 50-04 Tourbillon Split-Seconds Chronograph Kimi RÃ¤ikkÃ¶nen.
Wednesday, December 11, 2019 By Jx Chong

At the centre of this timepiece’s story is a deep connection with the 39-year-old racing veteran, who was crowned the F1 world champion in 2007, and the Alfa Romeo Racing team that he currently races for.

RÃ¤ikkÃ¶nen, also known as “Iceman” on the grid for his ability to keep cool under pressure, was presented the RM 50-04 during the Singapore Formula 1 Grand Prix this year and wore the watch with pride during the race. That itself was a testament to the Finnish driver’s confidence in the exceptional built quality of the RM 50-04 as the timepiece survived the exceptional g-forces placed on it and the driver during the heated race.

Coming to the watch itself, the RM 50-04 is a manual winding tourbillon movement that includes a host of other indicators that include a split-seconds chronograph, 30-minute totaliser, power-reserve and torque.

Limited to just 30 pieces, the RM 50-04 is made of grade 5 Titanium, Carbon TPT and a titanium movement that attribute to its ultralight weight of just 7g. This was done under Richard Mille’s watchful eyes to give the calibre an incredible resistance capability making it suitable for race car drivers and enthusiasts.

The case is water-resistant to 50m and features a striking white quartz material that covers the bezel and caseback, matching perfectly with the red accents and straps that make up the team colours of the Alfa Romeo Racing team.