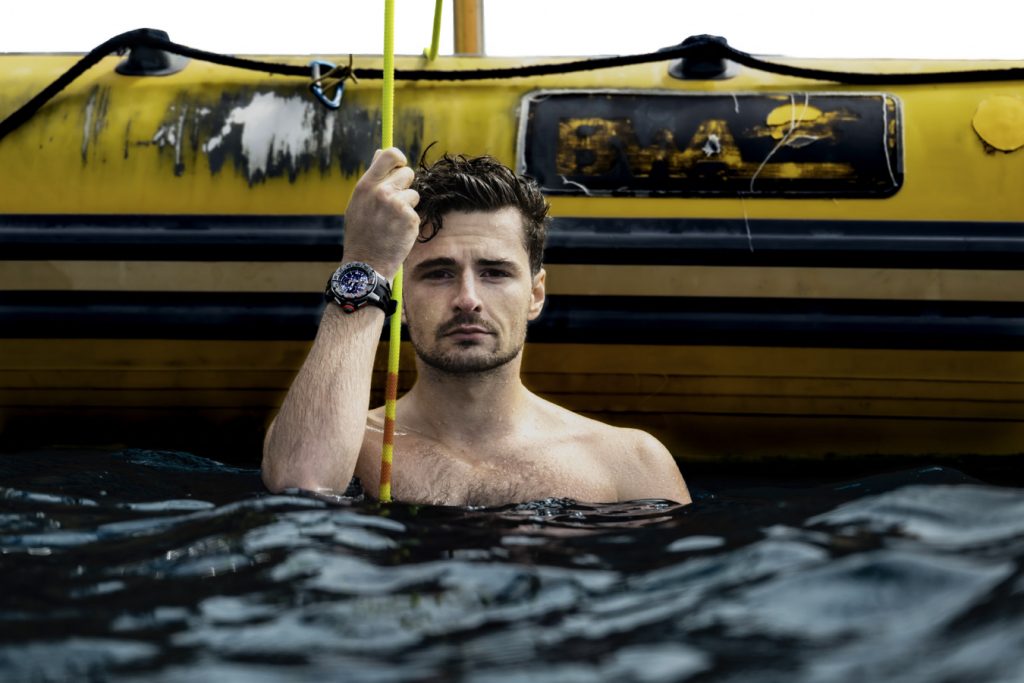 Recently, Arnaud has been selected as a new partner joining the Richard Mille family, exploring the depths of the ocean with the RM032 Automatic Flyback Chronograph Diver’s watch.
Wednesday, July 21, 2021 By Sarah Hani Jamil

At 25, French diving champion Arnaud Jerald has already achieved four world records, with the latest being a 117m dive during the Vertical Blue competition just this week in the Bahamas. His prior achievements were 116m, also in 2021, 112m in 2020 and 108m in 2019.

For the uninitiated, freediving is a form of sport that requires you to hold your breath underwater rather than using an oxygen tank or scuba gear. It’s an activity that requires a great deal of courage and focus and is definitely not for everyone.

The act of diving beyond 100 metres is a huge feat as, at that level, every square centimetre of skin has 11 kilos of pressure bearing down on it. “You have to push your body, but freediving is 80% what goes on in your head,” says Arnaud.

For Arnaud, exploring the depths of the ocean came naturally to him at an early age. Regarding his career choice, he says, “I felt left out at school. I had no confidence in myself and even worse was my hypersensitivity towards the noise. Then, at age seven, my parents took me to the creeks around Marseille. I put on a mask and snorkel, and there, underwater, for the very first time I opened my eyes. I was afraid – not of having no air – no, I was afraid of being so free! I suddenly became strong. I flew through the water like Peter Pan, totally weightless … That’s when I decided I was going to be a professional free diver!’

Recently, Arnaud has been selected as a new partner joining the Richard Mille family, exploring the depths of the ocean with the RM032 Automatic Flyback Chronograph Diver’s watch. However, it was he who got in touch with the brand.

“As soon as I saw the RM 032, I just knew it was the one for me, so I reached out. I experience time differently. Underwater one minute lasts a whole day. I need my watch as a tool and it has to accompany me all the way,” he says.

The RM 032 Diver’s watch is an automatic chronograph, with a running indicator at 3 o’clock and is created for the deep sea. The calibre RMAC2 is protected by a large case measuring 50.00 mm x 17.80 mm with water resistance of 300 metres (30 atmospheres) and a unidirectional turning bezel compliant with ISO 6425 norms that prevent miscalculations whilst diving.