Defined by an almost industrial look with a grid-style baseplate and boldly minimalist finishes, Panerai’s hand-wound, openworked watches have little in common with the typically ornate aesthetic of other skeletonised haute-horlogerie models, but that’s exactly why we like them. However, because Panerai usually reserves the openworked treatment for complex timepieces with tourbillons, or astronomy and chiming complications, its skeleton watches typically come with eye-watering six-digit price tags.

Housed in a 47mm case made from Panerai’s carbon fibre-based composite Carbotech, the watch is powered by the P.4001/S, a skeletonised movement based on the P.4000 calibre. Including a second time zone function and an AM/PM indicator, the slim movement (7.36mm thick) is characterised by an off-centre micro-rotor and has a hacking seconds function. The timepiece also showcases the brand’s patented polarised date display, which uses a date disk with numbers that are only visible when viewed through the date window. The watch has a three-day power reserve, which is indicated on the back. As expected of a diving watch, PAM 1240 is water-resistant to 300m and has a unidirectional bezel for tracking immersion time.

(See also: Bvlgari Participates in the Only Watch 2021 Auction)

While we don’t mind co-branding on watches that are born of a partnership, there’s quite a lot of that happening here. Some are subtle, such as the red accents found on the hands, date window and AM/PM indicator. However, the Brabus branding also makes several appearances, including the movement, the strap, the caseback and the crown-guard lever, which seems a tad excessive to us. Aside from that, though, we do rather enjoy the aesthetics of this watch, and hope that it’s the beginning of more accessibly priced skeletonised offerings from Panerai. 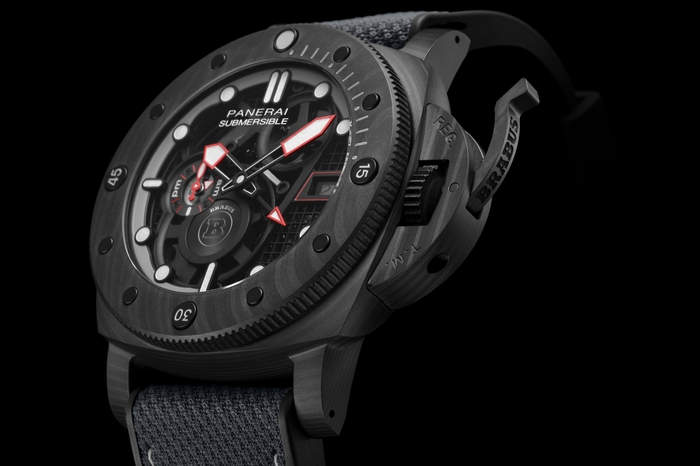 The article originally appeared in thepeakmagazine.com