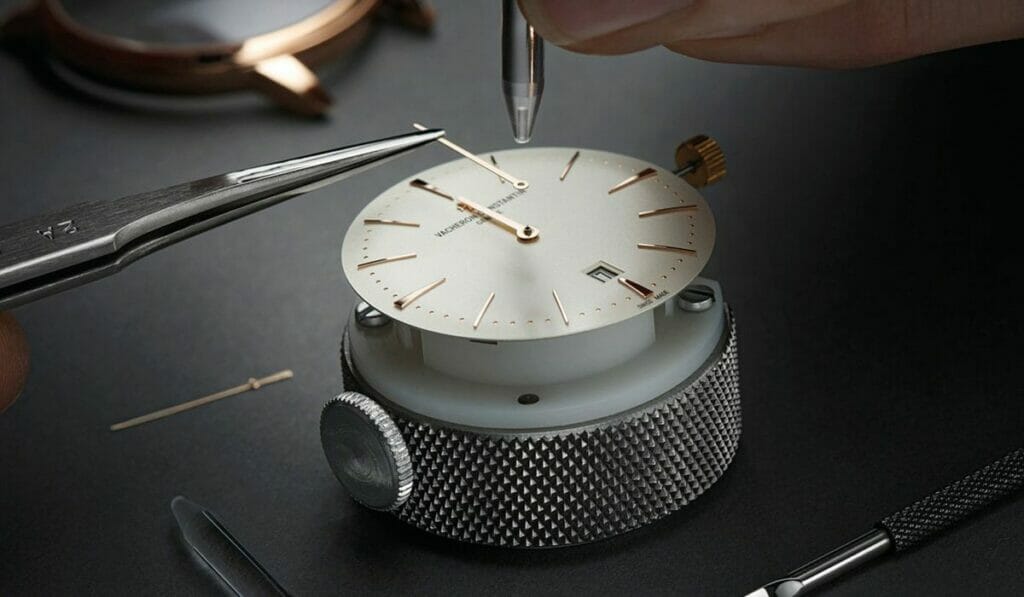 This year, watch companies will have to meet stricter requirements to label their watches â€œSwiss Madeâ€. Hereâ€™s what it means and how much it matters.
Thursday, July 6, 2017 By Editors

Yes, thatâ€™s right. One of the key highlights for the independent luxury watchmaker was the Swiss Mad, a watch made from a composite containing Swiss cheese. And not just any cheese, but Vacherin Mont dâ€™Or, which comes from the same village as H. Moser CEO Edouard Meylan. It also has a cowhide strap. The watchâ€™s raison dâ€™etre: To make a satirical statement against the criteria that companies have to meet in order to label their watches as â€œSwiss Madeâ€.

At the beginning of this year, new laws kicked in, requiring 60 per cent â€“ instead of the former 50 per cent â€“ of the value of a â€œSwiss Madeâ€ product to be of Swiss origin. For Meylan, these standards still remain far too lax. Speaking to us at the SIHH, he elaborated on the Swiss Mad timepiece: â€œItâ€™s an absurd idea. We wanted to open peopleâ€™s eyes to this issue, and the best way to do that is to be extreme, provocative and a little absurd.â€

Why does Swissness matter? The actual name of a Bill passed in 2013 to protect products of Swiss origin, the term is more than a matter of semantics â€“ itâ€™s big business. Studies have shown that people are willing to pay more for watches from the Alpine nation. While figures vary, a 2016 survey by the University of St Gallen found that respondents were willing to pay up to 100 per cent more for a Swiss luxury watch, as compared to one with no known origin. Thatâ€™s a lot of Swiss francs.

This positive perception is affirmed by local watch collector and jewellery trader Christopher Yeo, who owns pieces by top Swiss brands such as Audemars Piguet, Patek Philippe and Rolex. Says Yeo: â€œTo me, the term Swiss-made means prestige, quality, reliability and technical know-how. When a watch is made in Switzerland, I believe it bears a degree of technical quality that only a few countries are capable of achieving.â€

IN DEPTH MB&Fâ€™s HM7 dive watch features a bezel that had to be specially sourced from South Korea.

Today, a watch can be considered Swiss-made if its movement is Swiss, its movement is cased up in Switzerland, and final inspection is carried out in Switzerland. It is the definition of what constitutes a Swiss movement that has come under scrutiny, and allows plenty of room for manoeuvring: At least 60 per cent of its value â€“ excluding the cost of assembly â€“ must be of Swiss origin, and it must have been assembled and inspected by the manufacturer in Switzerland.

While most Swiss high-end watches easily meet the requirements â€“ almost all the parts in H. Moser and MB&F timepieces, for instance, have native origins â€“ entry-level and mid-priced watch brands have come under fire for playing fast and loose with the regulations. One way that companies can get around the rules and use largely cheaper parts from Asia, yet easily hit the 60 per cent value requirement, is to include a handful of Swiss-made components, such as balance wheels and springs. This is simply because of the extremely high costs of production in Switzerland.

CROWNING GLORY The Rolex facility in Bienne, Switzerland, where all the brandâ€™s movement parts are made.

Dismissing the new regulations, the founder of high-end independent brand MB&F, Max Busser, says: â€œIt doesnâ€™t change anything. Whatever the percentage, you can always find a way around it because production in Switzerland costs so much. Between the machines and employees, producing a part in Switzerland will cost you between $180 and $200 per hour. Itâ€™s insane.â€

In an article from 2012, when the Swissness Bill was in the midst of being passed, The New York Times ran a story that mentioned entry-level watch brand Swiss Mountaineer: â€œSwiss Mountaineer emblazons Switzerlandâ€™s national flag on the dial of each timepiece. Does it matter that except for its Swiss movement, the watchesâ€™ components are made at a factory in Shenzhen, China? Or that Swiss Mountaineer is owned by a Hong Kong company called Golden Hawk?â€

For some industry watchers, however, â€œSwiss Madeâ€, while a typically recognisable mark of quality, is far from everything when it comes to haute horlogerie. Firstly, while the Swiss dominate the fine-watch industry, a few other watchmaking centres â€“ most notably in Germany and Japan â€“ have emerged. Their products are as respected by connoisseurs as any ticker crafted in Switzerland.

A tiny East German town with a population of about 7,000, Glashutteâ€™s origin story is well-known to fans of top manufactures based here, such as A. Lange & Sohne (pictured) and Glashutte Original. As silver mining in Glashutte waned in the 19th century, watchmaker and entrepreneur Ferdinand Adolf Lange started the regionâ€™s first watch manufacture â€“ A. Lange & Sohne â€“ and kick-started a thriving watchmaking industry. One of the townâ€™s brightest young stars is Nomos, which has earned rave reviews for its affordably priced designs equipped with in-house movements.

Singaporean-basedÂ collector Steven Krisman, whose collection includes Swiss brands such as MB&F, as well as Glashutte Original (Germany) and Grand Seiko (Japan), points out: â€œGrand Seiko, which is Japanese, is no less inferior to Swiss or German watches in terms of finishing and finesse. It does not matter to me where a watch is made, just like it would not change my appreciation of the Las Meninas (by Diego Velazquez), if it had been painted by a non-Spaniard.â€

As the managing director of a family business specialising in aluminium, Krisman has greater insight than the average layperson when it comes to the sourcing of raw materials. He adds: â€œHigher-end Swiss-made watches are not necessarily 100 per cent Swiss. The diamonds and alloys, exotic reptilian leather straps, and sapphire crystals are most probably imported from other countries. Just because a watch is 100 per cent Swiss-made watch does not mean it is the best. The best watches in my book would require components from outside Switzerland â€“ I would prefer, say, the lapis lazuli on a dial to be from Afghanistan, a black mother-of-pearl dial from Tahiti, or alligator straps from the United States, and so on.â€ 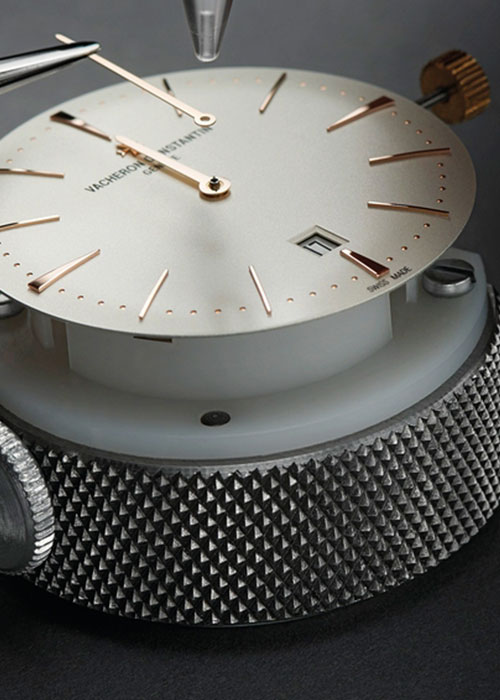 LABEL INTENSIVE The â€œSwiss Madeâ€ label, seen here on a Vacheron Constantin Patrimony dial, remains for many an indicator of quality.

Top watchmakers do not disagree. Indeed, Meylan shares that H. Moser watch straps are sourced from outside Switzerland because â€œwe want high quality and we havenâ€™t been able to find the right sourceâ€, although he adds that this might change in future. While showing us the latest MB&F watch, the avant-garde HM7 â€œAquapodâ€ diving watch, Busser was happy to share that the watchâ€™s bezel was made in South Korea. 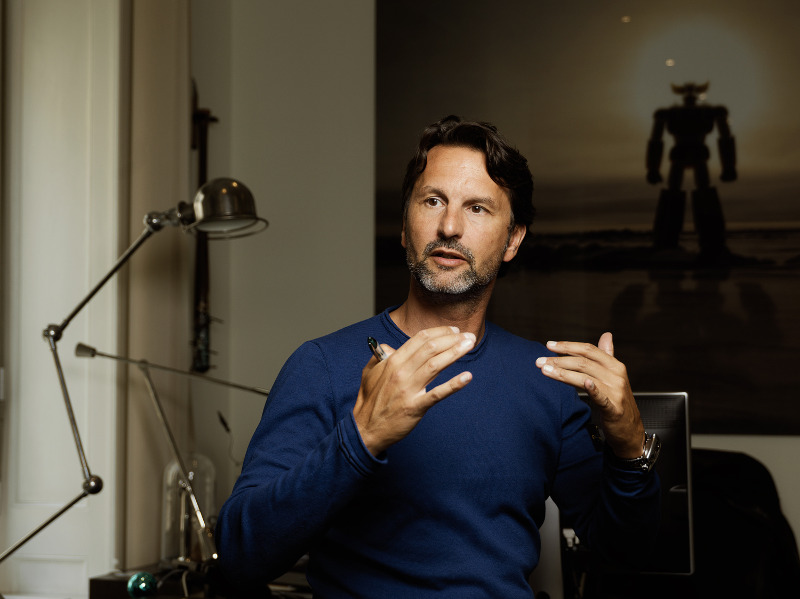 A fully curved bezel that appears to float around the spherical inner case, it was â€œa pretty big nightmareâ€ to create, says Busser. Each bezel was engraved with five-axis lasers, filled with titanium and polished. He says: â€œThe HM7 is fully made in Switzerland except for the bezel, because we couldnâ€™t find anybody in Switzerland who could make it.â€

He reveals that the bezels for the watch, which will be made in a limited run of 50 pieces this year, were made in South Korea by a large company specialising in high-end ceramics. With a laugh, he says: â€œBut we didnâ€™t save on any expenses, for sure. It was much more expensive doing it there than it would have cost in Switzerland. We had to go back and forth four times, and we made it do I-donâ€™t-know-how-many prototypes and tests. It is a gigantic company, and we broke its stamps, just for 50 bezels.â€

To Busser, at the end of the day, the issue that all watch lovers should be concerned with is not the â€œSwiss Madeâ€ label per se, but transparency. He says: â€œWhen you have an MB&F, we give you the name and details of every person who has worked on your piece. You can see all their profiles on our website.â€

The outspoken MB&F chief sums up his stand by citing, interestingly, the example of tech giant Apple. â€œJust be honest. Whatâ€™s written on an iPhone? â€˜Designed by Apple in California. Assembled in China.â€™ Nobody has a problem with that. It makes fantastic products, and makes US$200 billion a year that way. Nobody says, â€˜Oh, itâ€™s made in China; itâ€™s crap.â€™ Of course not.â€