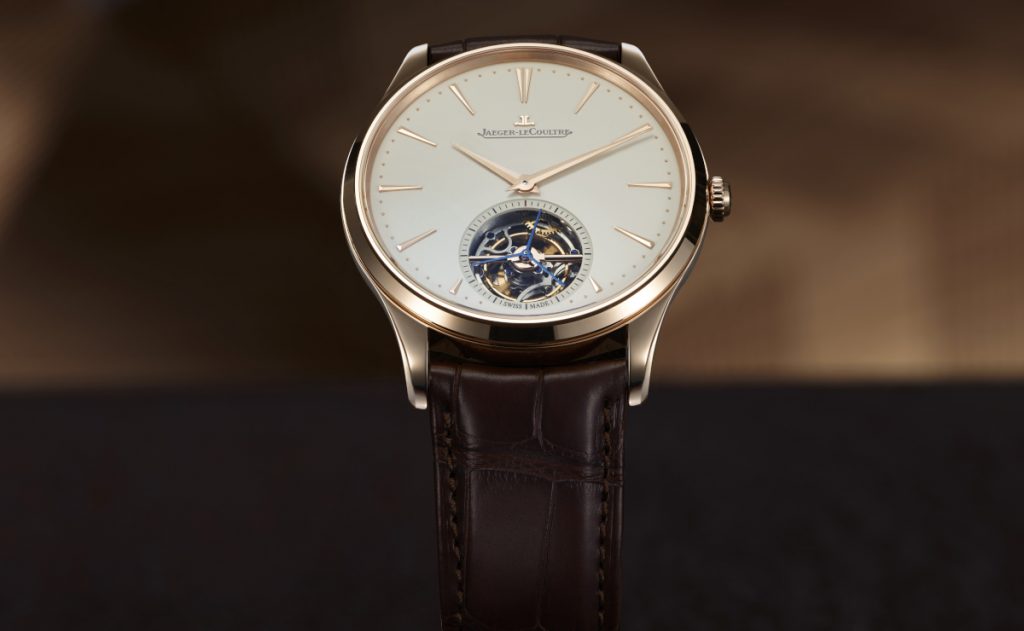 A celebration of precision in a model of exceptional finesse, sums up the philosophy behind Jaeger-LeCoultreâ€™s Master Ultra Thin collection.
Wednesday, March 13, 2019 By Jx Chong

Jaeger-LeCoultre has expanded its Master collection for Men with a new addition, the Master Ultra Thin Tourbillon watch which comes in a very fetching pink gold colour.

The newest addition to the collection follows in the watchmakerâ€™s lineage of Ultra Thin models, clearly inspired by its first model designed in 1907. Defined by its pure shapes and the roundness of its case, there is a strong emphasis on its hour-markers and sophisticated Dauphine hands.

Immediately, oneâ€™s eyes will be drawn to the Tourbillon, with its new gold bridge. Through the wide aperture at 6â€™clock is the Tourbillon as it rhythmically moves in aerial lightness within its titanium carriage. The extremely sophisticated crafting of the watch- both its details and finishes -bring a whole new dimension, no matter which angle you take to admire.

The graceful rhythmical movements of the tourbillon in its titanium carriage is mesmerising.

On the back of the watch, the new main plate of the automatic movement is on full display, highlighted by a sunray finish.

Despite being only 10.77 millimetres thin, Jaeger-LeCoultreâ€™s latest effort is able to accommodate the Jaeger-LeCoultre Calibre 978G. The self-winding mechanical movement benefits from a 45-hour power reserve.

The new pink gold version of the Master Ultra Thin Tourbillon emblemise perfect equilibrium with a balance that can be enjoyed both rationally and emotionally. The sober pink gold case and eggshell dial are balanced by a brown alligator leather strap.

This serves as proof that technical stringency does go hand in hand with some creative audacity. The master watchmakers, artists and craftsmen at the Manufacture in the VallÃ©e de Joux have abided by this golden rule since the Grande Maisonâ€™s beginnings.