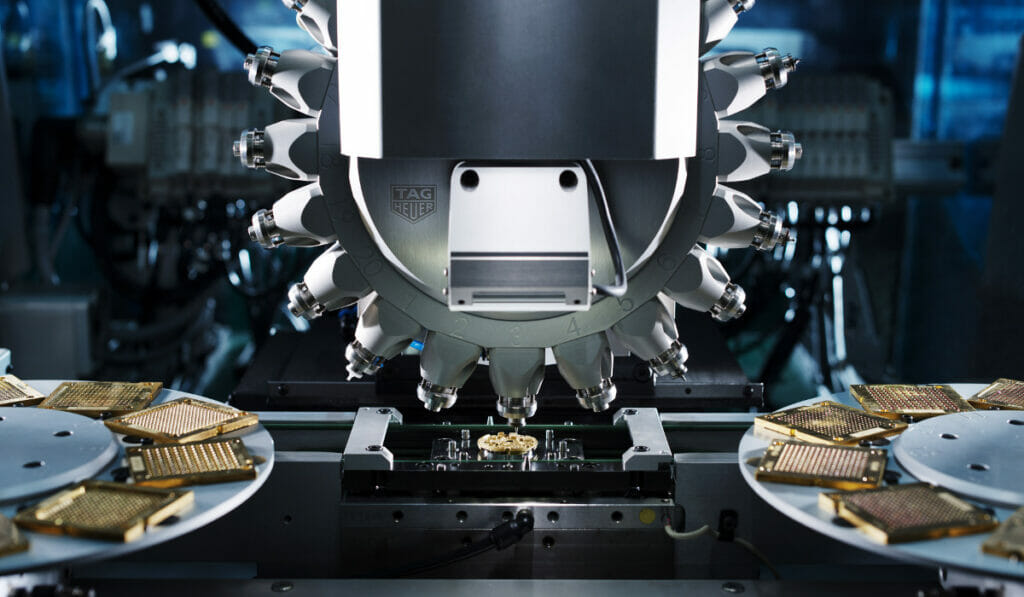 One would be hard-pressed not to fall in love with the magic of the small, hard-working Swiss mountain municipality of La Chaux-de-Fonds. Founded in 1656, this town of 37,000 or so inhabitants resides among the tranquil surroundings of the Jura mountains at an altitude of 1,000m, making it the highest city in all of Europe. Officially declared a UNESCO World Heritage Site in 2009, La Chaux-de-Fonds also happens to be the birthplace of influential greats like Swiss-French architect and designer Le Corbusier and Louis Chevrolet, the gifted race driver, inventor and cofounder of the iconic motoring company that still bears his name today. Also worth knowing about this peaceful slice of alpine paradise is its well-deserved reputation as the world capital of the watchmaking industry for over a century â€“ a history that can be explored further at the cityâ€™s International Museum of Horology (MusÃ©e International de lâ€™Horlogerie), which dedicates itself to anything and everything to do with the study and measurement of time.

Spring is in the air when we finally arrive in the canton of NeuchÃ¢tel, and our journey through the land of time begins at a row of nondescript buildings that is home to the headquarters of TAG Heuer. Suspended in the centre of this grand edifice is a massive vertical banner displaying images of the Carrera Heuer 01 and Monaco V4 â€“ an indicator of whatâ€™s to come for the lucky visitors of that day, many of whom have travelled thousands of miles for this golden opportunity to discover what truly makes this avant-garde watchmaking manufacture tick. Flanking the entrance to the building is the brandâ€™s all too familiar logo aglow in shades of green and red, completed by the beloved slogan, â€˜Swiss Avant- Garde since 1860â€™, which refers to the origins of this legendary watchmaking company.

It was, indeed, all those years ago when the brandâ€™s founder, a Swiss watchmaker by the name of Edouard Heuer, decided to pursue his passion by setting up a workshop in Saint-Imier, a quaint municipality located a mere 22 minutes away by car from where the brandâ€™s main headquarters stands today.

After passing through the automated glass doors, it was finally time to uncover the secrets that lie within this imposing structure of shiny steel, gleaming glass and cool cement. The TAG Heuer headquarters in La Chaux-de-Fonds serves as not only the main office and commercial base, but also houses various labs dedicated to quality control as well as research and development; a futuristic 360 museum and a cosy atelier designated for the manufactureâ€™s haute horlogerie creations. The tour begins with an ascent up a spiralling staircase made of thick frosted glass that leads to a winding hall flanked by various empty offices. According to our guide for the day, it is a quiet period to visit as most of the staffers had gone to attend the grand centennial of Baselworld, the worldâ€™s largest and most important watch and jewellery show that takes place every year in the historical Swiss city of Basel.

The first stop is the computer-aided design office located just steps away from the official office of CEO and Swiss watchmaking legend, Jean-Claude Biver. Within the confines of this newly refurbished space are high ceilings illuminated by a well-placed skylight and the glow of several computers. Here, staffers can be seen tinkering away in peace as they silently tweak and adjust 2D sketches and 3D renderings of various timepiece designs that will later be realised by the manufactureâ€™s engineers and watchmakers. Depending on the complexity of the design, the time it takes to validate a prototype can take anywhere between 12 and 18 months to complete. Keen-eyed observers will also be able to find various trays brimming with intriguing watch prototypes that have been cast out of a resin-like substance and appear semi-opaque when held up against the light. Standing within the confines of this serene space, one can only imagine the numerous novelties that have been brought to life in this workshop.

We make our way to the next location, passing by a private room where the TAG Heuer Connected smartwatches are manufactured in completesecrecy. Just opposite this is a room that has been converted into a makeshift studio for graffiti artist Alec Monopoly, who recently became TAG Heuerâ€™s latest global ambassador. After a few minutes of exploring, our group arrives at a sterile laboratory housing sophisticated machines that have been specifically designed for simulating various conditions. It is here that the varied components that make up a watch prototype will undergo over 60 tests that have been endorsed with a patent from the Federal Institute for Intellectual Property in Switzerland. Under the watchful eyes of experts, each watch that enters this lab will be rigorously tested for accuracy, reliability, quality and resistance to ensure that the timepiece will be able to withstand the test of time. Not surprisingly, insiders jokingly refer to this room as the â€˜torture chamberâ€™.

Once a prototype passes these stringent tests with flying colours, it is then sent to a massive assembly line located within the headquarters, where dozens of watchmakers can be seen working in unison, scrutinising various watch parts to ensure that every timepiece that enters this department will live up to the manufactureâ€™s exact standards, before it finally goes into production. According to statistics, the watchmakers at TAG Heuer will spend an estimated 40 hours a week or 1,920 hours a year inspecting these tiny components, some measuring no bigger than a comma on this page. The atmosphere in this space is relatively tense compared to the haute horlogerie atelier. Located in a room that offers breathtaking panoramic views of the nearby mountains, it is here where a select team of watchmakers, gifted with a special kind of patience, will assemble the movements for the brandâ€™s coveted concept creations that include the sporty Carrera Mikropendulum and the futuristic Monaco V4 Phantom.

As much as we would have loved to spend an entire day in the presence of these limited edition timepieces, it was time to bid adieu to La Chauxde- Fonds and head for the hills of Chevenez. Located about 17km away from TAG Heuerâ€™s main headquarters, this small village of approximately 583 residents made headlines in 2013 when it was selected by the watchmaker as the site for its fourth manufacture. We arrived at high noon to find a massive angular building with a faÃ§ade covered in glossy black panels, which provided an interesting contrast to its quaint surroundings that included rustic farms and emerald green meadows dotted with grazing cows basking in the glorious warmth of the midday sun. With that in mind, it is worth noting that the brand has introduced several major environmental and green initiatives over these last few years, which include installing modern photovoltaic panels on the roof of its manufactures in Chevenez and La Chaux-de-Fonds.

Greeting us at the entrance of the contemporary manufacture was a large sculpture constructed from various symbols and characters that depicted the form of a watchmaker at work â€“ a mesmerising masterpiece that immediately brings to mind the incredible creations of Spanish artist and sculptor, Jaume Plensa. Once inside the building, we don lab coats made from durable cotton fabric and surgical shoe covers before proceeding into the main laboratory. Despite the comical-sounding appearance, this getup serves an important purpose â€“ preventing dust and other microscopic particles from invading the sterile space where the manufactureâ€™s precious calibres 1887 and Heuer 01 are developed.

We arrive at the pre-assembly workshop, where we find several cyan plastic trays displaying various watch components arranged like precious puzzle pieces ready to be made whole. In order to keep tabs on this seemingly never-ending stockpile, a special inventory tracking system has been developed to allow the manufacture to monitor the completeness and progress of the movements, which are displayed via charts and numbers that appear on several large screens located throughout the room. Once the movement is ready, it is delivered directly to the meticulous assemblers via a conveyor belt system that is connected to every individual work desk. It is this method of production â€“ where man and machine can both work in perfect harmony â€“ that allows TAG Heuer to produce the high volume of orders every year while minimising the risk of errors.

Elsewhere on the site, the low-pitched hum of several high-tech machines draws our attention. According to our guide, these custom-made contraptions have been specifically made for the manufacture to transform numerous plain square plates into the vital main plates that form the base in every TAG Heuer movement. Measuring no bigger than a graham cracker, each shiny brass plate will be cut by several machines with absolute precision to ensure that the necessary watch components will all fit perfectly into place. Before leaving, the group got a closer look at a brand new device that had just been acquired for the facility. Located towards the back of the room, a peek inside the glass panels of the main body reveals a small robot arm swooping back and forth to sort out a small pile of miniscule synthetic rubies. This tedious but vital task is a crucial step as without these precious â€˜jewelsâ€™, the friction between the various moving parts of a movement may affect the overall accuracy of a timepiece.

Of course, no watch can truly be complete without a case to call its own. Situated in an unassuming industrial building that sits in a quiet street in the municipality of Cornol, is another factory where TAG Heuerâ€™s distinctive cases are produced â€“ and where one can start to comprehend how the life of a case begins with a strip of metal. As we descended deep into the facility, the unmistakeable smell of lubricants mixed with scorched metal permeate the air, indicating that we are close to the source. After passing through a perplexing maze of halls and doors, we arrive in a massive warehouse-like space housing several hissing machines in all shapes and sizes, with some measuring twice the size of the average human. Despite the overpowering scents and noise, it was incredible to observe as these dedicated workers worked fastidiously to transform these rudimentary shapes stamped out of strips of metal into the polished cases that would one day adorn the wrists of not just the rich and famous, but also the young and ambitious.

Looking back on the events of that day and the various encounters with the people behind the brand, one canâ€™t help but contemplate the number of lives that have been touched by TAG Heuer, a world-renowned Swiss watch brand that was born out a noble desire to create watches that combine the best workmanship with the utmost accuracy. And it is by holding on to this steadfast philosophy for all these years that the TAG Heuer name has managed to remain relevant for over a century, a feat that is becoming increasingly challenging in the competitive world of haute horlogerie. Despite the many obstacles that may lie ahead, one can possibly surmise that this Swiss watch brand is one that wonâ€™t be cracking under pressure anytime soon.