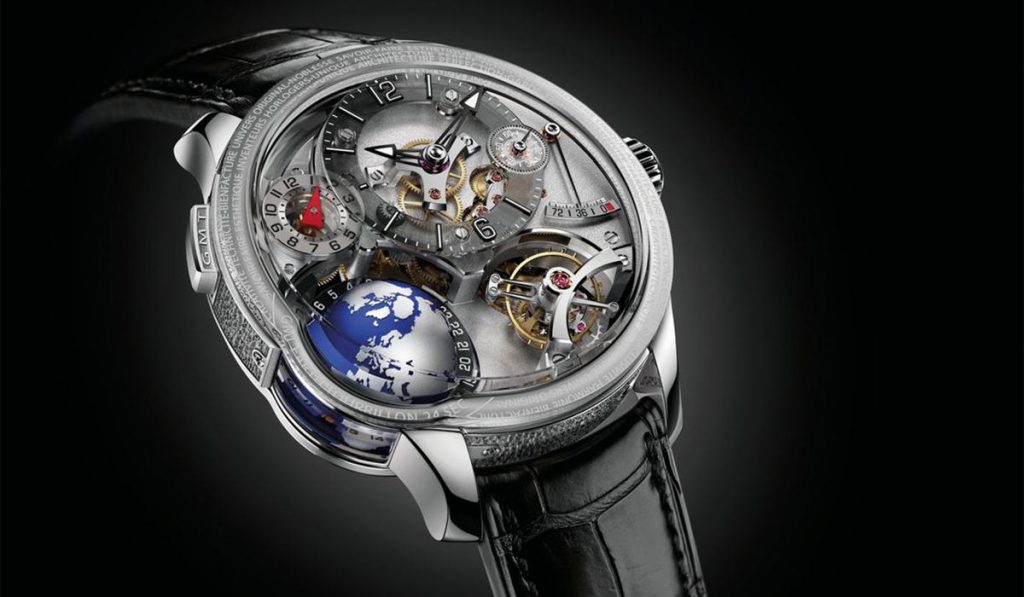 Its name says it all: At the heart of the watch is a miniature globe that rotates once per day, just like the earth.
Friday, November 23, 2018 By Editors

Greubel Forseyâ€™s timepieces are typically hyper-complicated affairs, and the GMT Earth is the latest iteration of what connoisseurs have come to love and expect from the brand. Its name says it all: At the heart of the watch is a miniature globe that rotates once per day, just like the Earth. It comes complete with the North and South Poles, and can be observed in detail from the dial, caseback, and via an aperture in the case middle. A host of other complications adorn both sides of this watch. They include an inclined 24-second tourbillon, GMT indication, world time display, and power reserve indicator.

With all its complications, the watch looks busy whichever the angle one observes it from. The dial side alone mixes transparent, translucent, and opaque indicators, solid and skeletonised hands, and various surface finishes in a layered, three-dimensional arrangement. Ditto the caseback, which is dominated by the worldtimer display and southern view of the globe. If thatâ€™s not enough, the case itself is ornately decorated with polished and brushed surfaces, and even engravings in relief. Finally, the movement. Greubel Forsey is known for its superlative movement finishing, and the watch does not disappoint. Suffice it to say that this timepiece is perhaps best appreciated as an objet dâ€™art.

At 45.5mm wide and 16.18mm high, this watch doesnâ€™t appear too unwieldy on paper. Wearing it on the wrist, however, is a different matter altogether. For a start, the white gold case has significant heft. This is compounded by the thick sapphire crystal that imparts an airy transparency to the front of
the watch, but also makes scratches seem like a given. Itâ€™s worse on the caseback â€“ to accommodate the globe, thereâ€™s a domed protrusion on the sapphire crystal at the back that will certainly make its presence felt.