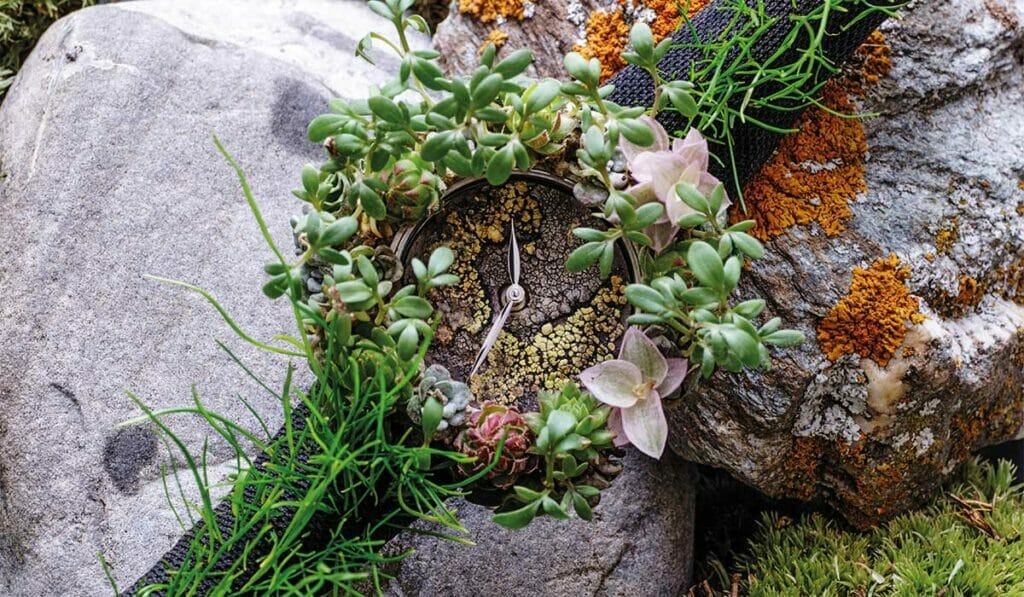 Faced with a new generation of green-minded consumers, manufactures are pulling out all the stops for sustainability.
Monday, September 23, 2019 By Editors

If you were the owner of the one-off Moser Nature Watch, you would not just have to regularly wind it â€“ you would have to water it as well. Created by independent brand H. Moser, the not-for-sale timepiece features a steel case luxuriantly surrounded by living plants harvested from the nursery in its Schaffhausen manufacture, as well as a dial covered with mineral stone and lichen from the Swiss Alps.

Unsurprisingly, it was one of the talking points at the Salon International de la Haute Horlogerie in Geneva earlier this year. While the cheeky statement piece was intended to highlight the Swiss horologerâ€™s commitment to environmental consciousness, it also drew attention to the unlikely pairing between haute horlogerie and ecological sustainability â€“ one that might almost be as unexpected as wearing Swiss succulents and cress on your wrist.

H. Moserâ€™s Nature Watch makes a statement about its commitment to the environment. The fully functional timepiece is decked out in a variety of living Swiss plants.

Here, he wears the COSC-certified Superocean Heritage II Chronograph 44 Outerknown that comes with a Nato strap made from Econyl yarn (recycled nylon

Last year, Chopard announced that it would use only ethical gold in its products. The Happy Palm watch is one example made from Fairmined gold. Fairmined is an assurance label that certifies gold from responsible mining organisations.

Itâ€™s not just what you produce, but how you produce it. Ulysse Nardin recently introduced the use of a new material, Carbonium, in its Freak X and Skeleton X (pictured) models. The material is made of carbon- composite byproducts generated from the manufacturing of aircraft parts and, just as importantly, is made using a specially developed process. The process used to create Carbonium boasts a 40 to 50 per cent reduction in environmental impact, as compared to similar products made from virgin materials.

To accentuate the importance Panerai places on environmental conservation, the Italian watchmaker, in partnership with South Africa-born Swiss extreme explorer Mike Horn, debuted two editions of the 47mm Submersible Mike Horn diverâ€™s watch, the PAM 984 and the PAM 985. Both versions of this timepiece feature a case, crown protector and unidirectional rotating bezel that are made from Eco-titanium (recycled titanium), coupled with a strap made from recycled plastic. But hereâ€™s the real dealmaker: The 19-piece limited- edition PAM 985 comes with a chance for its owner to join Mike Horn on an expedition to the ice floes of the Arctic, and also to probably experience, first-hand, the disappearing sea ice and the beating that the ecosystem continues to endure.

In 2015, German watchmaker A. Lange & Sohne introduced a new manufacturing wing at its Glashutte premises that was designed to be carbon-neutral from the outset. This includes the installation of geothermal heat pumps for indoor climate control and large glass windows that allow an abundance of natural light, both of which significantly reduce the dependence on electricity.

Conceptually, luxury watchmaking and sustainability appear to be mismatched bedfellows, at least on the surface. With a reputation for celebrating indulgence and excess, the horology industryâ€™s efforts in social and environmental sustainability have been sometimes regarded as nothing more than hollow marketing and lip-service â€œstorytellingâ€.

To exacerbate matters, the watchmaking industryâ€™s credibility in the area of ecological conscientiousness further withered when the World Wildlife Fund (WWF) released a report last year criticising the detrimental impact of watch-and jewellery-making on nature, citing a lack of transparency and commitment in dealing with sustainability issues and tackling climate change.

Evidently, those criticisms hit home â€“ hard. Over the last two years, watch manufacturers have acknowledged the need to hold themselves to higher green standards, in tandem with the recognition of the immense equity that comes with being ecologically â€œwokeâ€, especially when catering to the environmentally conscious tastes of younger generations of consumers.

Watchmakers with exemplary track records in sustainable development have taken the lead by vigorously bringing to the foreground not only their renewed conviction in adopting and producing ecologically responsible practices and timepieces, but also their past efforts in this arena. Chopard, for instance, has drawn attention to its exclusive use of ethically sourced Fairmined- and Fairtrade- certified gold in its jewellery and timepieces, a practice that the Geneva-headquartered watchmaker first embarked on in 2013.

To demonstrate its solid track record in driving corporate social responsibility, IWC â€“ which came out tops in terms of its green practices in the WWF report â€“ published a sustainability report last year that emphasised its pledge to the UN Sustainable Development goals, including the fact that it has been certified carbon-neutral since 2007.

Having supported many exploration projects since 1933, when it equipped the British Everest Expedition, Rolex recently announced its latest project with the National Geographic Society: Perpetual Planet Extreme Expeditions will see the two entities plan a five-year scientific exploration of extreme environments around the globe, starting with an expedition to Mount Everest.

A growing number of watch companies have been upping their green credentials of late, imbuing their products and processes with eco-friendly touches. An array of recently released watches represent such brandsâ€™ rejuvenated commitment towards ecological sustainability, and some go beyond just the use of recycled materials to include environmentally focused experiences and manufacturing processes.

Breitlingâ€™s new Superocean Heritage II Chronograph 44 Outerknown, for instance, comes with a strap made of recycled nylon. No less importantly, it also represents the brandâ€™s association with world-class surfers Kelly Slater, Stephanie Gilmore and Sally Fitzgibbons, who are also champions of ocean conservation. As CEO Georges Kern said at the Breitling Summit held in Basel in March: â€œWe love being a part of this community whose members have such a cool, laidback lifestyle but who are also committed to protecting the ocean.â€

Beyond products, almost every recently built manufacturing facility or office integrates a slew of sustainable features. When well- considered, such practices are not just beneficial to the environment but also to a companyâ€™s bottom line, offering savings in the consumption of energy and other resources. Pretty win-win, really.

Noting during the inauguration of its new building that it â€œrepresents an investment in the manufactureâ€™s futureâ€, A. Lange & Sohne CEO Wilhelm Schmid said: â€œThe focus was on a modern, energy- efficient building that would offer appealing surroundings and ideal working conditions. This will help us further enhance the quality of our watches and optimise our production processes. We strive to minimise our ecological footprint and resource consumption.â€

Whatâ€™s clear is that the soil in which luxury watch manufacturers have been sowing the seeds of environmentally responsible practices is fertile. It may well be what the industry needs to enter its next stage of growth â€“ sustainably, of course.