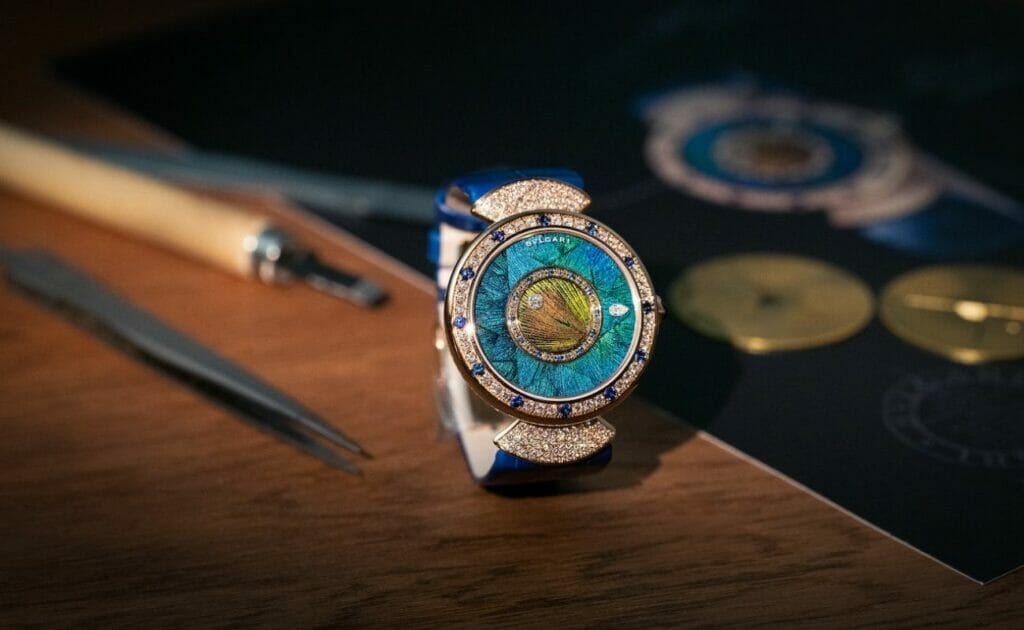 A fully silver-coloured watch might sound tricky to read in bright daylight, but Bvlgari CEO Antoine Pin assures us that this is not the case with the new Octo Finissimo S. Water-resistant to 100m, the timepiece features a 40mm polished steel case with a silver-coloured, brushed dial with polished numerals and indices in a matching hue. With a laugh, Pin shares: “The proposal was a bit scary at the beginning. But Fabrizio (Buonamassa Stigliani, Bvlgari Watches’ chief designer) and I tested the watch during the summer and we said that if it didn’t work and we couldn’t read the time, we wouldn’t launch it.” We believe him.

One of three peacock-themed Divas’ Dream timepieces released this year, the Dischi edition ties a fine, feathered dial decoration with Bvlgari’s BVL308 Dischi automatic movement that uses two rotating discs to indicate the hours and minutes. This time display allows the feather marquetry to truly shine. Using the traditional technique of marquetry, 24 hand-cut feather elements, including a central circle depicting the eye of a peacock feather, are set into each dial. The feathers are selected and matched for colour and texture and have to be trimmed, glued, cut and pieced together by hand.

The first thing you might notice about Bvlgari’s latest tourbillon minute repeater is its sporty appearance, thanks to its grille-style dial and matte black DLC-coated titanium case. Besides being an interesting aesthetic for a traditional complication, the goal was to deliver the loudest sound. Titanium, for one, is a low-density metal that allows for louder sound transmission as compared to gold. Even the case middle has been hollowed out where possible to minimise the amount of metal. Its three openings also let sound travel more effectively. A great idea because who wouldn’t want to hear the three-hammer Westminster chimes of this new 44mm timepiece as clearly as possible?