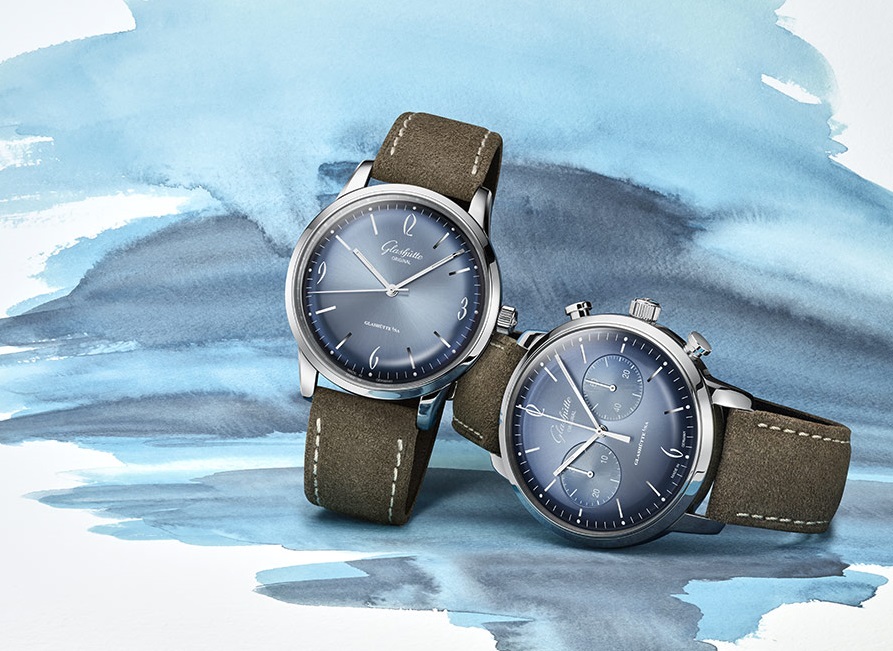 Glashütte Original’s Sixties Collection is certainly one of the most refined of the classic three-hand watches. Although its most basic version is simplicity personified – the Sixties is inspired by a design that goes back to the 1960s, hence its name – the watchmaker from Saxony is not averse to giving the timepiece a dash of cool. In 2018, Glashütte Original decided to make the Sixties an annual edition by debuting a version with an eye-catchingly vivid green dial.

The dial on this year’s edition is no less impressive. The cool shimmer of the dial is the work of experts in Glashütte Original’s in-house dial manufactory in Pforzheim, Germany. There, dial blanks are first given a delicate sunray finish before being pressed into their characteristic domed shape and given a galvanic nickel coating. To achieve the striking dégradé effect, they are then sprayed with dark blue lacquer, which first gives them a dark edge.

Then, the entire surface of the dial is given a coat of glacier blue lacquer. This elaborate hand-crafting results in the individual colour gradient renders each dial unique. Finally, the dials are heated in an oven to burn in the colours. The incised indices, printed numerals and Super-LumiNova highlights on each hour marker complete the work of art.

The Sixties Chronograph is equipped with a central stop-second along with two inset auxiliary dials for the small second and 30-minute counter. The domed sapphire crystal caseback on both models offers a clear view of each watch‘s finely finished movement, with three-quarter plate, swan-neck fine adjustment, Glashütte stripe finish and skeletonised rotor with 21K oscillating mass.

Rounding off the elegant appearance of the new Sixties and Sixties Chronograph are brown-grey nubuck calfskin straps with lightly contrasting stitching and pin buckle. Both models are available for a limited time only from GlashÃ¼tte Original boutiques and selected authorised dealers worldwide.