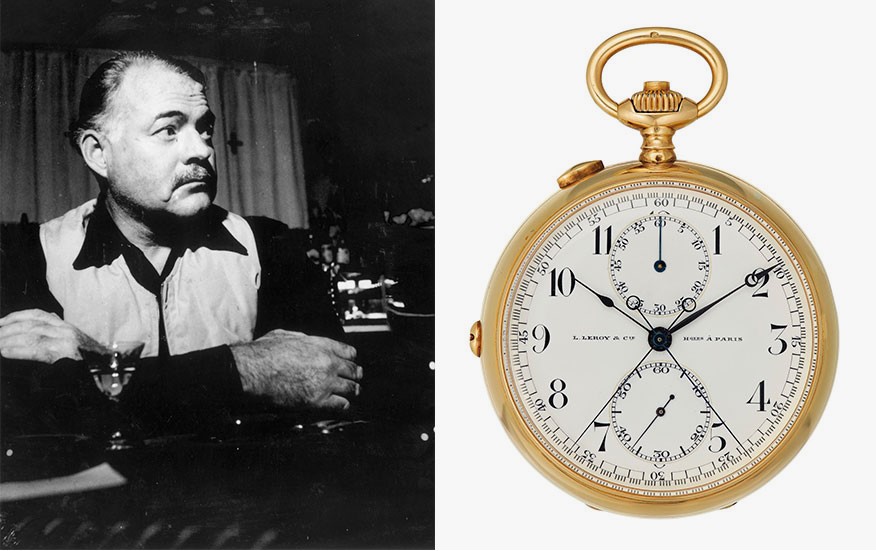 There is a remarkable story behind this gold pocket watch that matches the rich history of its owner, Ernest Hemingway.
Friday, December 20, 2019 By Jx Chong

Now here is a chance to own a piece of history. A gold pocket watch that was once owned by one of the most celebrated novelists of the 20th-century Ernest Hemingway, is now for up for auction at the British premier auction house Christie’s.

Made by L. Leroy & Cie, circa 1920, theÂ  18-karat gold 53mm diameter pocket watch is certainly large by today’s standards. It features a split-seconds chronograph and was very practical as it functioned like a stopwatch, which was very useful to Hemingway who was a big horse racing enthusiast and loved to time horse races.

It has a long storied history as it was given as a wedding gift to Hemingway by famous hotelier Charles Ritz to commemorate the novelist’s fourth and final marriage to journalist Mary Welsh in 1946.

But how did a watch of such illustrious background end on the auction block? Well, it turns out that the pocket watch had in fact been hiding in plain sight for years.

According to Christie’s New York watch specialist Rebecca Ross, Hemingway’s pocket watch was one of two pocket watches that were framed together with a signed photograph of Ritz that reads ‘With warm regards and great friendship, Charles C. Ritz’.

Charles Ritz was the son of the founder of Ritz Hotels, Cezar Ritz. Hemingway and Ritz would develop a close friendship as the former would closely be associated with the Ritz Hotel in Paris.

Encased in a gold frame on top of a red velvet background, the photo and the watches in its entirety are very indicative of the roaring Art Deco period after World War I.

Following Hemingway’s death in 1961, his widow Welsh had returned the watch to Ritz who had in turn gifted the pocket watch along with one of his own to the American entrepreneur Henry Dormann as a gesture of friendship.