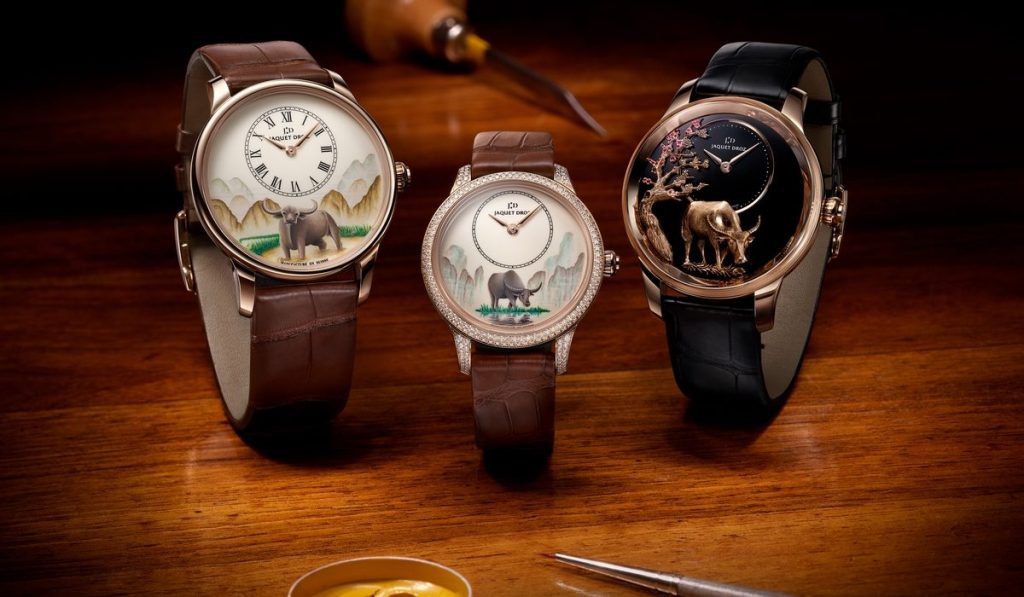 The Chinese zodiac animal symbolises conscientiousness and reliability — qualities that stand us in good stead at any given time
Thursday, December 31, 2020 By Lynette Koh

It might still be 2020 – just – but we have already received many greetings expressing the hope that the troubles of this year will be well behind us with the arrival of 2021. While a new year might not automatically translate to a fresh slate, what’s important is to approach it with conscientiousness, persistence and reliability — traits that would stand most people in good stead, any time and anywhere.

These qualities, and more, are embodied by next year’s Chinese zodiac animal, the Ox, which takes over from the Rat on 12 January next year. Celebrating tradition, not just in terms of Chinese culture but in the decorative arts as well, here is the latest herd of  Year of the Ox timepieces.

It’s always interesting to see how the different watch companies interpret the creatures of the Chinese zodiac. Looking positively festive and almost jolly, Chopard’s take features a golden ox with a lustrous coat, harnessed to a wagon. Housed in a 39.5mm rose gold case, the automatic timepiece features a dial made using the traditional Urushi lacquer technique.

Created by master lacquer artist Minori Koizumi and produced by the century-old Yamada Heiando company, the dials of the 88-piece limited edition call for the skilful application of layers of lacquer and gold powder. Despite a thickness of just 6.8mm, the watch has a respectable power reserve of 65 hours thanks to its stacked twin barrels.

Piaget: Altiplano Year of the Ox

The design is first transferred onto the surface of the dial, using gold wire to create sections in which the various enamel pigments are placed. The dial has to be repeatedly fired at very high temperatures. Finally, the dial is varnished, immortalising this impressive ox — which we sure hope is a bullish representation of what the coming year will be like.

Not into large depictions of animals on your watches? Blancpain offers an alternative featuring just a tiny emblem of an ox at 12 o’clock (and a larger one engraved on its white-gold rotor), but only those who know how to read the traditional Chinese calendar need apply.

The watch shows the main indications of this traditional calendar: double hours, days, months and leap months, zodiac signs, five elements and 10 heavenly stems. (We told you this watch wasn’t for everyone.) A truly unusual complication, this calendar feature took Blancpain five years to develop. The 45mm watch is self-winding and features a seven-day power reserve. Available as a 50-piece platinum limited edition and a non-limited red gold edition.

Vacheron Constantin: The Legend of the Chinese Zodiac — Year of the Ox

Vacheron Constantin’s Chinese zodiac timepieces are inspired by the Chinese paper-cutting technique known as jian zhi. The repeated, cut-out motifs associated with the traditional craft are interpreted and created on dials by the manufacture’s master engravers and enamellers.

To commemorate the Year of the Ox, Vacheron Constantin has released two self-winding 40mm models, one in platinum and one in pink gold. The foliage on the dial is engraved in relief directly on metal, creating an effect of depth. The dial, either blue or bronze-toned, is then given its colour with Grand Feu enamelling, which requires multiple firings at temperatures of between 800 and 900°C. The star of the show itself, the ox, is crafted from platinum or pink gold, and applied to the centre of the dial.

As early as 1774, the Jaquet-Droz family had made its presence felt in the Chinese imperial court, fascinating Emperor Qianlong with its mechanical automaton timepieces. Today, the first watchmaking brand imported into the Forbidden City makes some of the most beautiful Chinese-zodiac watches, year after year.

For 2021, the Swiss brand offers four variants of its Year of the Ox timepieces: Two red-gold models — one 35mm with a diamond-set bezel and lugs, and one 41mm — feature miniature paintings, while two 41mm models — in red or white gold — feature relief engraving. The miniature paintings depict an ox against a serene backdrop of mist-shrouded mountains, while the relief engravings feature an ox next to a gold plum tree with red ruby flowers.

Impressively, the oscillating weights of these self-winding timepieces have also been engraved in accordance with the Ox theme. Each watch is produced in a limited edition of eight.

This watch is for the person who wants it all: A versatile size, a mechanical movement, diamonds, mother-of-pearl (in red and white) and enough red to keep bad luck at bay for a few generations (or at least, to keep a traditional grandparent happy).

At the centre of this timepiece proudly stands an ox, whose silhouette was first rendered in rose gold and then applied to the dial. The colour of the ox itself comes from the red mother-of-pearl dial, the white mother-of-pearl used on details such as its eyes, and the diamonds that highlight its horns and other parts of its body.

Unsurprisingly, there are diamonds everywhere else too: On the chapter ring, at 12 o’clock (where an emerald-cut diamond pays tribute to the brand’s founder’s favourite diamond cut), all over its rose-gold case (57 brilliant-cut diamonds) and the rose-gold ardillon buckle of its strap (17 brilliant-cut diamonds). Despite everything that’s going on on the outside of this timepiece, the people at Harry Winston did not forget about its insides: it is powered by the automatic movement HW2014, which features an antimagnetic silicon balance spring.