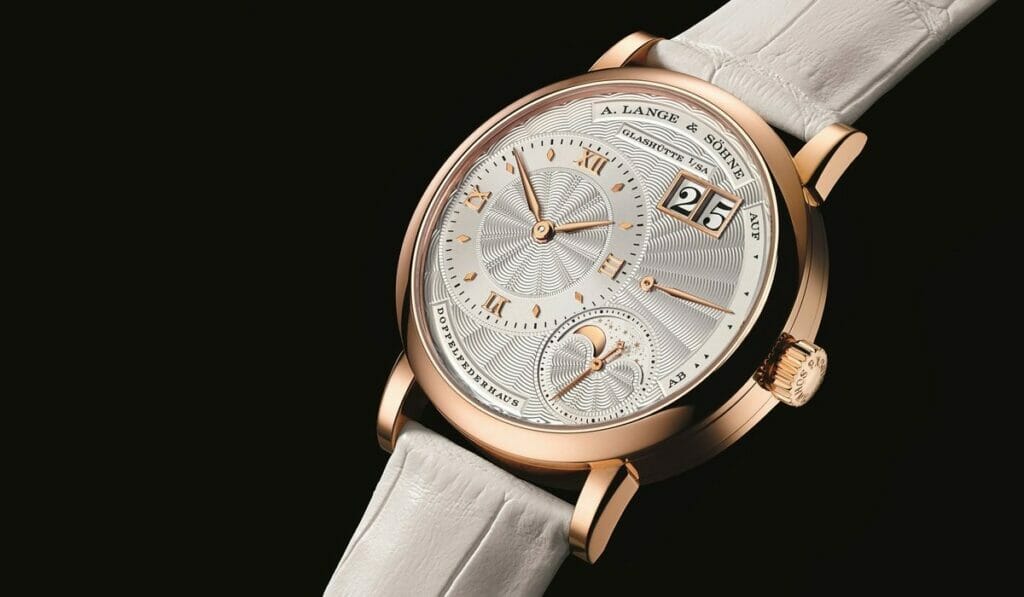 Our picks of the top mechanical timepieces for ladies go way beyond mere pretty faces.
Friday, July 21, 2017 By Daniel Goh

Techanical watches and especially complications â€“ once the preserve of men â€“ are now highly coveted by women. If youâ€™re serious about your timepieces, youâ€™ll have noticed that womenâ€™s watches have been a big focus lately in an industry that tends to favour the menâ€™s market. Itâ€™s no longer enough just to downsize an existing menâ€™s watch, insert a quartz movement or an older mechanical movement, sprinkle it liberally with diamonds, tack on a mother-of-pearl dial, and market it to ladies. Aware that womenâ€™s interest in technical watches is far greater than a decade ago, brands have been making a conscious effort to offer complicated mechanical timepieces created especially for the fairer sex. Here are seven of our favourite watches that combine both style and substance.

The asymmetrical Lange 1 with outsized date display was the hero watch that helped revive A. Lange & SÃ¶hne in 1994 and it just keeps getting better. Today, the Little Lange 1 Moon Phase proposes the new manually-wound L121.2 movement with twin barrels providing 72 hours of power reserve â€“ based on the updated Lange 1 movement from 2015 â€“ which drives the moon phase and instant date jump on a guilloched, argentÃ©-coloured gold dial in a 36.8mm pink gold case.

First launched in 2005, Breguetâ€™s emblematic Tradition collection is now enhanced with the 37-mm rose gold Tradition Dame 7038. The watchâ€™s unusual architecture offers views of the main movement components dial-side, and its symmetrical layout gives the piece a distinct visual identity. Powered by the self-winding Calibre 505SR, it showcases a central barrel with a rosette motif, a hobnail guillochÃ© pattern, white mother-of-pearl dial at 12 oâ€™clock, engraved retrograde seconds at 10 oâ€™clock and wheels forming an arc from four to eight oâ€™clock.

Time at Hermes is playful, spontaneous and full of emotions. Building on the popularity of the super-slim and minimalist Slim dâ€™Hermes watch collection, which has all the makings of a future classic, Lâ€™Heure Impatiente allows the user to set her watch to the time of a much-anticipated event that will take place within the next 12 hours. An hour before, a countdown at six oâ€™clock sets off, enhancing the sense of expectation, until a lasting note rings out at the desired time, animated by the self-winding manufacture Hermes H1912 movement.

Highly handy for the globetrotting businesswoman, the Patek Philippe Ref. 7130 Ladiesâ€™ World Time indicates all 24 time zones at a glance on a grey-blue hand-guilloched dial centre housed in a 36-mm white gold case. Local time shown by the hour and minute hands refers to the location on the city disc that is directly aligned with 12 oâ€™clock. To switch from one time zone to another, simply press the button at 10 oâ€™clock. Genevan watchmaker Louis Cottier created this practical function in the early 1930s and offered it to Patek, which patented it in 1959.

In Van Cleef & Arpelsâ€™ Lady Arpels Papillon Automate, a butterfly automaton beats its wings randomly and irregularly: every two to four minutes when the watch is off the wrist, and increasingly frequent as the wearer becomes more active. It can also be triggered on demand via a pushbutton, thanks to a self-winding movement made by Manufacture ValFleurier exclusively for Van Cleef. Various decorative arts â€“ paillonne enamel, champleve enamel, mother-of-pearl sculpture, gem-setting and miniature painting â€“ are showcased, including a brand-new technique invented by Van Cleef & Arpels: curved plique-a-jour enamel forming twisted blades of grass.