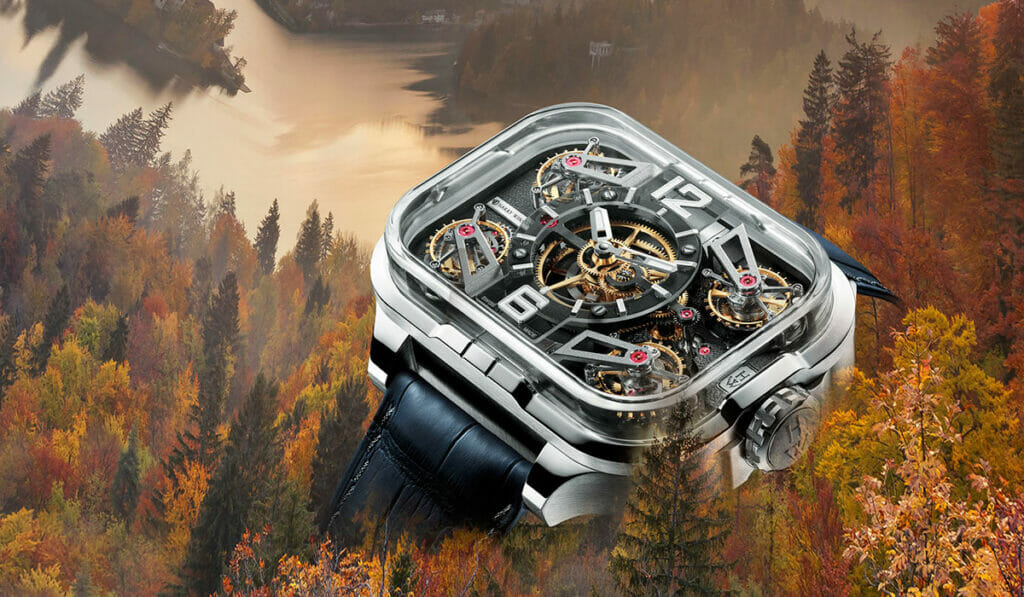 The Peak witnessed firsthand the inaugural Swatch Group Time To Move (surely, a knowing reference to the groupâ€™s departure from the Basel watch fair this year) showcase of 2019 novelties. The event culminated in a party on board a yacht, presided over by Nayla Hayek, Chairwoman of Swatch Group and President of Harry Winston, and her son Dr Marc Hayek, board member of the group and President and CEO of GlashÃ¼tte Original, Blancpain, Breguet and Jaquet Droz. Here, we present six of the very best from the groupâ€™s most luxurious brands.

The Fifty Fathoms series has gained legendary status from its creation in 1953, being the only diverâ€™s watch to have met all the stringent specialist requirements of the time. So exacting have been its standards that no less than world special diving forces have employed the timepiece, including the German Bundesmarine, whose standard issue of the timepieces was supplied by Barakuda. The technical diving equipment company later helped issue a civilian model. Elements from both have been kept for the 2019 reissue, including the black dial with two-toned red and cream markers, the date window set back to 3 oâ€™clock and the tropical type rubber strap that came with some of the 1960s models. Blancpainâ€™s signature unidirectional bezel is a mainstay here as is its scratch-resistant sapphire glass insert. The 40mm self-winding timepiece is limited to 500 pieces and is powered by the twin-barrelled 1151 caliber seen from the back, with an 18K gold rotor that has been constructed so as to help protect the movement from undue impact while keeping the oscillating weight in check.

At Breguet, handcrafted excellence and heritage extends to the Classique Tourbillon Extra-Plat Squelette 5395 . This 3mm ultra-thin fully skeletonised 41mm watch delivers an 80-hour power reserve thanks to the self-winding Caliber 581. Its incredible lightness and economy is due to 50 per cent of material edited with its gold plate and bridges hollowed, emphasised by the 581â€™s titanium carriage. The movementâ€™s rotor has also been placed on the plateâ€™s periphery, while its distinctly angled silicon escapement has its gear train directly driving the carriage. Immediately apparent is Breguetâ€™s craftsmanship, showcased on the hand-engraved inscriptions in the front and back of the watch, and hand-worked anglage and Clous de Paris hobnailing. It is no small claim that Breguet is one of the few maisons left able to handcraft gold in such a meticulous way. The timepiece is available in a grey movement with a rose gold case and rose gold movement with a platinum case.

The purpose-built showcase at GlashÃ¼tte Original was all abuzz with the unveiling of the Senator Chronometer Tourbillon . For the first time, the Saxon manufacture has created a flying tourbillon combined with a second-stop mechanism, zero reset and minute detent, redefining precision to a T. Powered by the chronometer certified manual winding 58-05 caliber, the 42mm platinum timepiece (limited to 25 pieces) has a power reserve of 70 hours. Two patents were applied for its complex construction that allows the tourbillonâ€™s rotating cage â€“ and, subsequently, its second hand which is mounted on the cage â€“ to stop mid-flight the moment the crown is pulled. A deceptively simple concept, the pulling of the crown triggers a vertical clutch locking the tourbillon catch to its current position. When the crown is pulled further, the second hand moves to zero while the minute hand advances to the next marker. When the crown is released â€“ and while the small second remains at zero â€“ time is set precisely to the minute. When the crown is pressed back in, the seconds hand is released ensuring that minutes and seconds are in perfect synchronicity.

Journalists at this exclusive event were pleasantly surprised that Madame Nayla Hayek, Chairwoman of Swatch Group and President of Harry Winston, herself was on hand to welcome us at the maison. Her warm address only served to underscore many of the brandâ€™s offerings, not least the Histoire de Tourbillon 10 , the latest and final addition to the Histoire series. This is a gobsmacking, pioneering creation of a quadruple tourbillon with a triple differential construction. Four separate tourbillons running at 36 seconds per rotation in each HW4702 movement are housed in a colossal 53.3mm x 39.1mm x 17.6mm case. Time is read on its raised subdial, while the raised sapphire glass provides a clear view of all machinations. A more precise regulation of additional complications was what drove Harry Winston to push the boundaries of watchmaking and, to highlight this innovation further, three different incarnations have been produced. One unique piece is rendered in Harry Winstonâ€™s proprietary platinum alloy, Winstonium, while two other versions of white and rose gold offer just 10 units each. The Winstonium and white gold versions come with alligator leather straps stitched in 950 platinum thread, while the rose gold version is stitched in rose gold thread.

The kind of long-standing savoir-faire displayed at Jaquet Drozâ€™s atelier in La Chaux-de-Fonds is encapsulated in the 28-piece limited edition 43mm, 18K red gold Magic Lotus Automaton . A koi pond magically comes to life, thanks not only to the exquisite metiers-dâ€™art of the maison incorporating various techniques and gemstones, but also the complex workings of the 2653 AT2 caliber powered by two barrels. Once activated, the automaton runs for four minutes (one of the longest for Jaquet Droz), with the pond rendered on the peripheral disc first in motion. Craftsmen at Jaquet Droz have paid particular attention to the koi fish swimming around the dial in a fluid motion, employing racks and a separate gear train so that the fish swims left and right, even under and over the lily pads. More subtle is the lotus flower at 9 oâ€™clock, with a gem heart that magically changes from blue to yellow sapphire and finally ruby as it appears from under each lotus leaf.

The 50th anniversary of the worldâ€™s first moon landing has been especially celebrated at Omega, the watchmaker having been directly involved and officially acknowledged as the first to have its timepiece worn on the moon. The eagle has landed for the Speedmaster Apollo 11 50th Anniversary Moonshine Gold Limited Edition and harks to the original 1969 commemorative limited edition Speedmaster model. Number 1 of that first edition was given to then-US President Richard Nixon but was returned to Omega due to US government protocol. The new version is distinct from the 18K gold original in no small part due to its use of its new in-house alloy incorporating gold, silver and palladium. Moonshine Gold may be a shade paler but is no less outstanding, to which black onyx hour markers stand out. The 42mm reissue is powered by the new manual wound Omega Caliber 3861, complete with a co-axial escapement and silicon balance spring, gold-plated mainplate and bridges. The timepieceâ€™s inner workings can be viewed through its caseback marked with the commemorative 1969-2019 years. The inner decorative ring sees more tributes: Apollo 11 â€“ 50th Anniversary and The First Watch Worn On The Moon. A partial map of America focuses on Cape Canaveral where Apollo 11 first saw lift-off. Limited to 1,014 pieces, the same number as the original edition.