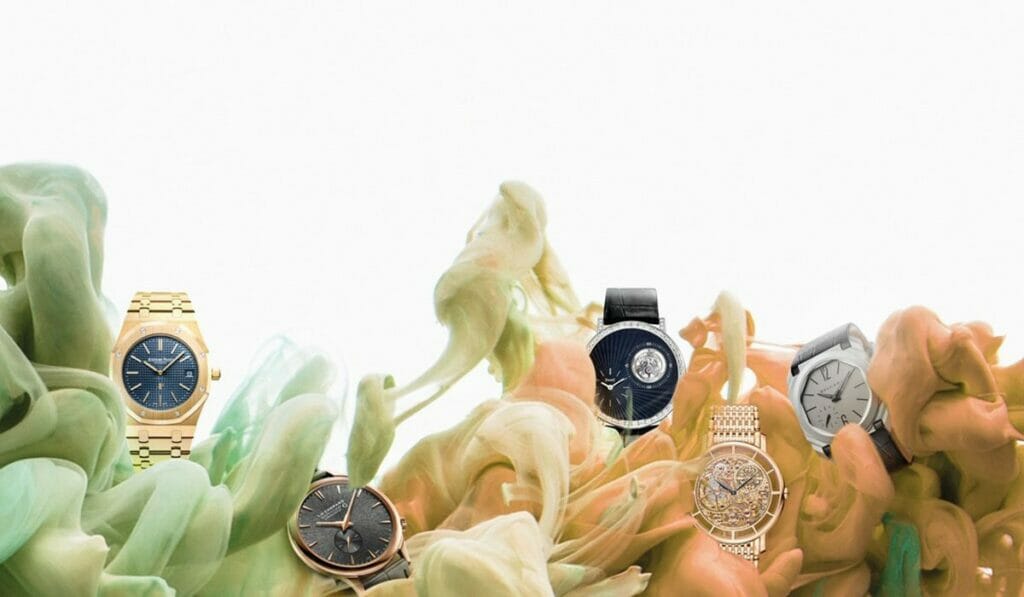 Go the bare minimum with these slim timepieces.
Friday, October 27, 2017 By Editors

If thereâ€™s one obsession the mechanical watchmaking industry has aside from making tickers more accurate, itâ€™s making them thinner. But weâ€™re not complaining. Not only do slim watches look great on the wrist, they also showcase serious technical know-how: removing what isnâ€™t necessary while minimising what is, all while ensuring the timepiece doesnâ€™t snap in half if someone so much as sneezes near it.

The Royal Oak made waves in 1972 when it was launched as the worldâ€™s first luxury stainless steel watch, and it was only in 1977 that precious metals were finally introduced. It is the latter milestone thatÂ Audemars PiguetÂ is celebrating, with the release of extra-thin versions in yellow gold. The Calibre 2121 has a total thickness of 3.05mm and diameter of 28.4mm, and is covered by either a blue or champagne dial, both featuring the â€œPetite Tapisserieâ€ pattern.

ChopardÂ admirably initiated its â€œFairmined Projectâ€ in 2013, in partnership with the South American NGO, Alliance for Responsible Mining. The latest watch to use Fairmined Gold is this 250-piece limited edition, which uses ethically sourced 18K rose gold for its 40mm case, hands and indexes. Just 7.2mm thick, the COSC-certified chronometer houses Calibre 96.09-L, which contains two barrels for 65 hours of power reserve.

To mark the 60th anniversary ofÂ Piagetâ€˜s iconic Altiplano line, it has created the collectionâ€™s first tourbillon. Limited to just 38 pieces, the 41mm white gold watch is set with baguette-and brilliant-cut diamonds, and features a guilloche gold dial coated with dark blue enamel. Since the Altiplano is practically synonymous with ultra-thin movements, this bejewelled piece maintains the tradition with a 4.6mm-thick manual-winding movement.

Patek Philippeâ€™s famous ultra-thin Calibre 240 is celebrating its 40th anniversary in 2017, and the brand has thus rolled out a number of models housing the movement, one of which is a rose gold version of the skeletonised Ref. 5180. Entirely decoratedÂ and engraved by hand (with the engraving alone requiring about 130 hours of work), this edition features the Patek Philippe Seal engraved on the winding rotor.

Leading the charge isÂ Bulgariâ€˜s third world record in ultra-thin horology: the Octo Finissimo Automatic, the slimmest self-winding watch on the market. The BVL 138 movement is 2.23mm thick and 36.6mm wide â€“ so thin that the entire 40mm case adds up to just 5.15mm in thickness. Thanks to its sandblasted titanium build, itâ€™s also incredibly light, weighing less than 50g with a leather strap, and around 80g with the full bracelet.