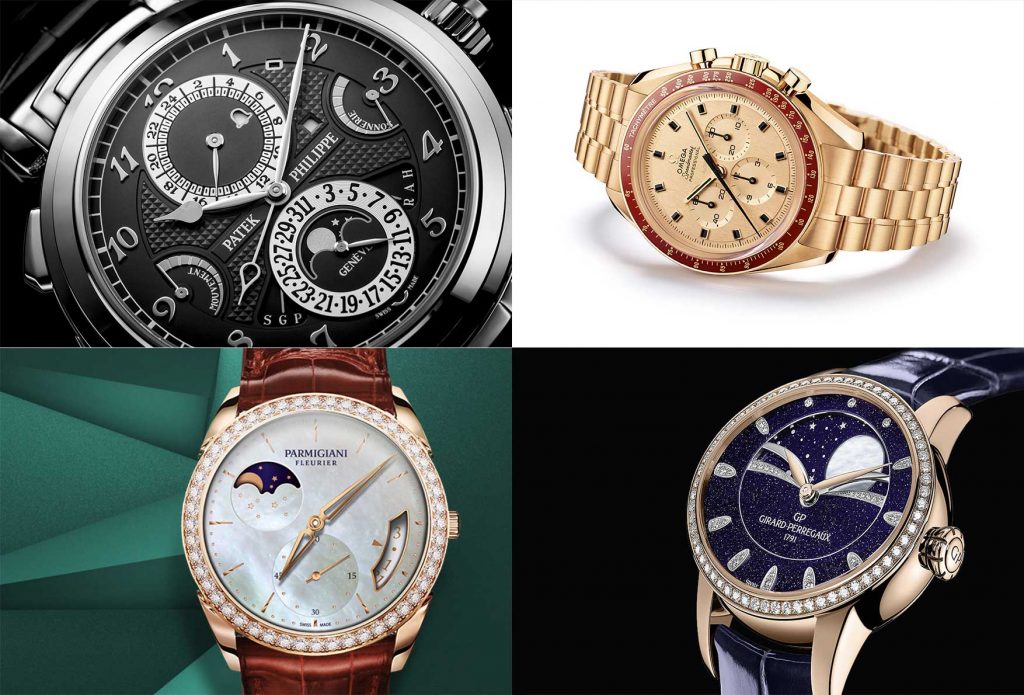 Entrancing timepieces that capture the stunning nature of the moon.
Tuesday, July 23, 2019 By Jx Chong

This year marks the 50th year since man first took his first steps on the moon. Indeed, nothing has come close matching the magic of that moment on 21 July, 1969 when astronauts Neil Armstrong and Buzz Aldrin set foot on the moon.

To commemorate this momentous occasion, here are 4 exceptional timepieces that perfectly pay homage to manâ€™s journey to the celestial body that orbits the Earth.

No list would be complete without mentioning the Omega Speedmaster. Carefully selected by NASA for its incredible durability, this historic timepiece has close links to space exploration as it was worn on the first American spacewalk by Ed White in 1965 and was the first watch to be worn on the moon by astronaut Buzz Aldrin, earning it the monicker â€˜moon watchâ€™.

It is fitting that Omega has released a special 50th anniversary limited edition of the moon watch to pay tribute to the Apollo 11 moon landing. Limited to 1,014 pieces and coated in an attention-grabbing 18K Moonshine gold, the 2019 version of the classic watch employs new alloy that is paler than traditional yellow yet is more resistant to fading over time.Â

Quite simply put, this 42mm timepiece is every bit as stunning as the original 1969 version. Framing the watch is a burgundy coloured ceramic ring coupled with black onyx hour-markers set within the dial. Within it, the Speedmaster is driven by the Omega Master Chronometer Calibre 3861, the brandâ€™s first manual-winding chronograph movement.

To top it all off, the watch comes with a grey ceramic â€˜crater boxâ€™ that prominently features a 3D printing of the lunar surface on the box that invokes the spirit of the moon.

Another timepiece that pays homage to the moon is Parmigiani Fleurierâ€™s Tonda 1950 Lune for women. In case you were wondering, 1950 happens to be the brandâ€™s founder, Michael Parmigianiâ€™s year of birth.

Sporting refreshed aesthetics following its debut in 2017, the dress watch is characterised by its new layout with the moon phase sitting at 10 oâ€™clock and the date window at 4 oâ€™clock. The 39mm watch has a smaller dial to accommodate a broader bezel that is big enough for large diamonds to be set within.

The Tonda 1950 prides itself with a PF708 calibre, an ultra-thin self-winding movement that allows it to maintain a slender proportion.

The piece can be accompanied by either an alligator leather strap of 18 ct rose gold bracelet.

As one of the most complicated wristwatches ever created by Patek Philippe, the Grandmaster Chime boasts 20 complications including five chiming modes, an acoustic alarm that strikes at a preselected time and a date repeater sounding the date on demand.

Encased in a 47.7mm white gold case, the Grandmaster Chime is adorned with a hand-guilloched hobnail pattern, with a reversing mechanism that allows the wearer to view either the front time side, which is decorated with a hand-guilloched hobnail motif, the on/off indications for the acoustic functions along with the vicil time, a second time zone, moon phases, date and power-reserve.

On the reverse side you will find a perpetual calendar with a central four-digit year display that is surrounded by four subsidiary dials that denote the analogue date, leap-year cycle, day, month and 24-hour indicator.

The heart of the watch is a calibre 300 GS AL 36-750 QIS FUS IRM manually wound movement. To complete the look, the watch is accompanied by matching white gold cuff links with blue opaline centres, decorated with a hand-guilloched hobnail pattern.

The Swiss manufacturer of luxury jewellery and watches has a moon phase watch that should not be missed. As the brand’s crowning glory, the L.U.C. Lunar One has the honour of carrying the initials of Chopard’s founder Louis-Ulysse Chopard. Combined with the Lunar One namesake surely this is a watch that has much to do with the moon.

Much has changed since the watch was initially launched in 2005. This new re-imagined version is every bit as captivating with its 43mm case housing a hand-wound Perpetual Chrono. The satin-brushed dials and gold-toned style hands exhibit something both new and classic at the same time, a feat few watches can boast of.

One of the oldest watch brands and manufacturers, Girard-Perregaux is known for combining craftsmanship, innovation and technology. One such piece that exemplifies the brandâ€™s know-how is the glittering and elegant Catâ€™s Eye Celestial.

Encased in a unique oval shape case, that measures 35.4mm by 30.4mm, is a dial that recalls a night sky filled with stars within a magnificent 8.9mm diameter moon-phase disc. The moon itself, made of mother-of-pearl, is said to make a complete rotation in 59 days.Â

A total of 33 brilliant-cut diamonds sit on the hour markers that encircle the moon phase disc, while another 62 diamonds adorn the case itself.

Fitted within this ladyâ€™s watch is an in-house manufactured movement, the GP03300-012 calibre, a self-winding mechanical movement. Curious watch enthusiasts can peer through the case-back. It has a power reserve of 46 hours.

To complete this classy dressy timepiece, the watch is fastened with a midnight-blue alligator strap.