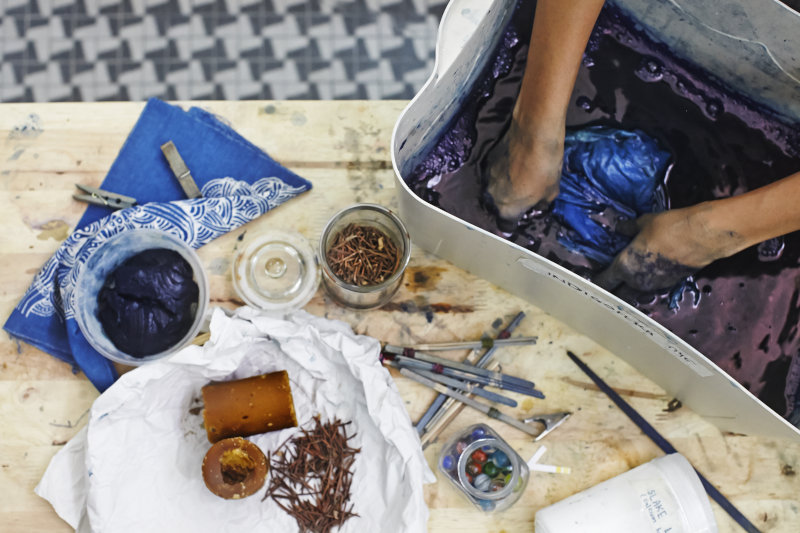 In the latest edition of The Peak Expert, we explore the creation of the colour indigo. Nicknamed â€˜blue goldâ€™ at the height of its popularity, indigo dye has certainly left its mark in the textile industry as can be seen in its early popularity in Japanese, Indian, Egyptian and Ancient Mayan cultures. While the world has since seen a drop in demand for natural indigo dye, the resurgence of eco-friendly fabrics and ethical clothing entering the fashion industry have revived indigo fever lately.

Indigo is extracted from the Indigofera tinctoria and is characterised by its intense hue of blue and natural antiseptic qualities. Naturally occurring in tropical climates ranging from Australia, through South-East Asia all the way to most African countries, Indigofera tinctoria is just one of the 50 species of indigo-bearing plants that researchers have identified. Even with a plethora of genus indigo-bearing plants around the world, there is no single point of origin from where the dye was first created and utilised.

From lining the borders of Egyptian linen mummy cloth around 2,400BC to being worn beneath the armour of Japanaese samurai to keep bacteria away from their wounds, the dye has marked history with its presence. However, many believe that India was the main, if not biggest, producer of indigo dye made from the indigobearing genus and not woad, a flowering plant that produces a similar shade to Indigo. As the British opened India up to European trade, indigo cakes, or pressed Indigo, were delivered to many European countries.

â€œTwo millennia ago, when dried indigo pigment was exported to Europe from India, it was reserved for paint and cosmetics. But a wonderful feature of indigo is that it will dye all kinds of fibres and this has made it a dye for the working person wearing practical fabrics as well as the dye for blues for luxury silks,â€ said Dr Jenny BalfourPaul, in an interview with The Peak. Dr Jenny has held a long time passion for the art of indigo dyeing with a career spanning over 40 years and three books to her name, Indigo in the Arab World, Indigo: Egyptian Mummies to Blue Jeans and Deeper than Indigo.

The art of indigo dyeing is a traditional process that requires patience, a skilled hand and finessed craftsmanship that requires years of training. In Japan, indigo dyeing is held up as a revered tradition that makes up the nationâ€™s cultural DNA with places like Higeta Aizome Kobo, or Higeta Indigo Dyeing Studio, which is one of the longest running Indigo production houses run by the original family. First founded in the â€œEdo periodâ€ between 1603-1868, the studio uses only the original traditional dyeing method they were taught, and if one is willing to stay and watch the entire process, one might even catch a glimpse of the famous Shibari tie-dye technique, local to Japan.

â€œOne of the main fascinations about indigo is the way different cultures have developed their own ways of using indigo that best suit local conditions. I love to watch different dyers around the world use their own methods and the ideal is a true fermentation dye vat,â€ said Dr Jenny. Her love for the dye has led to her planting various indigobearing plants and using a diverse array of methods to achieve the dye, merely as a way to understand the various facets of the indigo.

A once luxury commodity that was seen dethroned in 1867 when German chemist, Adolf von Baeyer, created synthetic indigo before having it commercially manufactured to the public in 1897. The overwhelming demand for the saturated blue dye led to its mass production with just over 50,000 tonnes of synthetic Indigo being churned out in 2018 alone. Despite the grasp synthetic Indigo has on society, sustainable fashion is very rapidly gaining a following with many big brands opting to join the cause and do away with â€˜fast fashionâ€™. A strong side effect of this campaign is the renaissance of the handmade natural process to treating clothes and cloths, of which indigo dyeing falls under.

One of the few Malaysian artisans to have stained her hands blue making Indigo products using the traditional process, Ummi Kalthum Junid, shares her insights as the owner of â€˜DuniaMotifâ€™, a company run from her home studio, on how she got into the Indigo dyeing business and what she hopes her local audience can take away from her painstaking passion.

When did your interest in indigo dye making first begin and have you always had an interest in creating natural dyes?

I loved looking at designs and exploring patterns from around the world. One of the interesting patterns that I felt a strong connection to was the Gurunsi House pattern from Burkina Faso. In 2014, i received the opportunity to work in West Africa, Sierra Leone. I took the opportunity to explore African batik where I was drawn to their color making where they used synthetic material such as remazol. As I explored further, I realised some colors could be made from flowers and vegetables, this triggered my interest in the field.

What does the future hold for DuniaMotif?

As DuniaMotif grows, I would like to turn it into a Textile Art Centre in Malaysia. It is a huge dream of mine because I have a much bigger plan in place for DuniaMotif. I would love to have a collective team where all textile artisans from batik to weavers, dyers, tailors,etc sit under one roof and share our passion via teaching the younger generation about textile. In Europe the concept of â€˜slow fashionâ€™ has been introduced to the system about 10-15 years ago. Yet here, in Malaysia we have the potential to also practice the same concept. For now, this is my contribution to mother nature to reduce fabric waste.

How did you learn about the art of Indigo dyeing?

Most of my learning experience is actually from Indonesia. I find it easier to communicate and it also helps that we use nearly the same resources. I travelled all the way to Jlamprang, Semarang, Indonesia to learn Indigo making. Beside Indonesia, India also showcases interesting natural dye methods that I am keen on picking up. Youtube and Google are also a big source of information for me that allow me to combine the Western and Eastern techniques into my own process.

Is there a market out there for Indigo products in Malaysia?

In Japan they have a few districts that plant, grow and produce Indigo As for the rest of Asia where Indigo naturally occurs like Indonesia, India as well as Thailand, I really donâ€™t see a reason for us not to have a market. Thereâ€™s so many things we can do with natural dye, aside from textile, and that can help us tap into other industries as well.