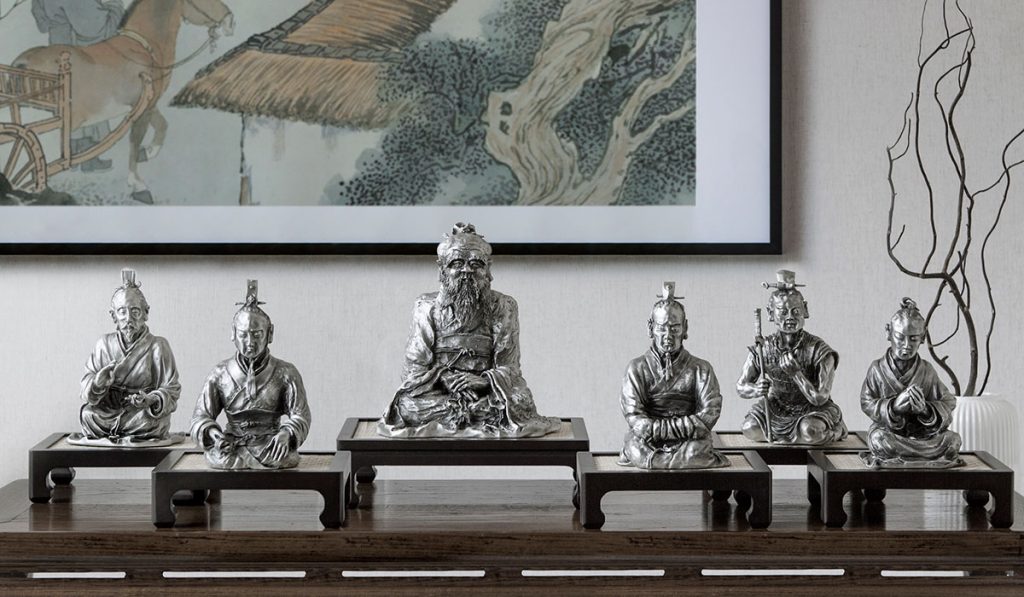 The Peak heads for Beijing to witness the launch of Royal Selangorâ€™s Celestial Wisdom collection.
Friday, January 17, 2020 By Christy Yoong

To say that Confucius was held in some esteem is a profound understatement. Hereâ€™s something to ponder when you wandering through the Confucius Temple in Beijing: there are an estimated 3,000 Confucius temples ( kongmiÃ o in Chinese) in China alone. And, even though the Beijing kongmiÃ o , built in 1302, more than 1,700 years after the death of Confucius, covers around 20,000 sq m, it is only the second largest of its kind. The one in Confuciusâ€™ hometown of Qufu is more than 10 times larger.

In all that time since his death in 473BCE, Confuciusâ€™ influence has waxed and waned, but he has never been more ubiquitous, more venerated today â€“ and not only in China but all around the world as well. And it is the many threads of his philosophy that Yong Yoon Li, Executive Director of Royal Selangor International, finds so fascinating: â€œItâ€™s a story that began more than 2,500 years ago and one that remains relevant to this day.â€

It is also a story that Royal Selangor, pewter smiths extraordinaire, seeks to perpetuate with its new Celestial Wisdom collection, which it launched in Beijing recently by Yong. An extension and expansion of Royal Selangorâ€™s Celestial Blessings collection â€“ which commemorates the mythology and deities of Chinese culture including Guan Yin and Guan Gong â€“ the new collection features figurines of Confucius and five of his disciples (see sidebar).

The Celestial Wisdom figurines are based on 40-year-old bronze sculptures by Taiwan-based artist Chiang Yi-tze.

The collection is based on 40-year-old bronze sculptures by Chiang Yi-Tze, a Taiwan-based artist who voluntarily withdrew from the art world in the late 1960s to better his art in private. â€œThis collection was three and a half years in the making, beginning when we first meet Chiang,â€ Yong says. â€œPart of the process was for Chiang to understand us as a brand as well as for us to understand the very wide and expansive ideology of Confucius.â€

It was also a personal voyage of discovery for Yong: â€œFor us Overseas Chinese, living two, three or four generations away from China, Confucius was just a name. We know about it â€“ respect your elders and that sort of thing â€“ but it was just rules. We didnâ€™t know the â€˜whyâ€™ and thatâ€™s what I did â€“ read about Confucius and his teaching, but slowly I began to learn the â€˜whyâ€™. Itâ€™s still tough understanding it but, at its essence, Confucianism is about being a good person.â€

What was interesting was how this collaboration, between Royal Selangor, the artist Chiang, art consultant Benjamin Tan, who came to Yong with the idea, and Richard Kong, a 78th-generation descendent of Confucius (see sidebar), tried to bridge what might seem impossible: transforming a philosophy into physical form. The figurines, after all, are not merely decorative; they also serve to inspire and illuminate.

While all the figurines come with a booklet that explains about each person and Confucianism, Yong sees an innate understanding of the philosophy in all of us, whether we know it or not. â€œWe know all about things like filial piety and respecting your family, things that we are taught by our parents, but thatâ€™s Confucianism. Itâ€™s certainly one of the most philosophical collections Royal Selangor has ever done â€“ it encompasses art, craft and philosophy, which, from a salesman point of view, is very complex.â€

That, however, hasnâ€™t deterred Royal Selangor at all. â€œI think itâ€™s a good story to follow on from Celestial Blessings, but here, instead of talking of the spirit, Celestial Wisdom is talking about the mind,â€ Yong explains. â€œI think Confucianism is even more relevant now than ever before, especially in this day and age when people are putting up borders and anti-globalisation. Celestial Wisdom is about reconnecting with your neighbours, your friends, society and community rather than putting up walls. Itâ€™s also a great way to celebrate Royal Selangorâ€™s connection with its roots, going back to the Chinese philosophies and Chinese culture. Itâ€™s a good way to awareness among our customers, regardless of who and where they are about Confucius because, if you think about, he is quite the universal figure.â€

Kong Deyong is a 77th-generation direct descendant of Confucius.