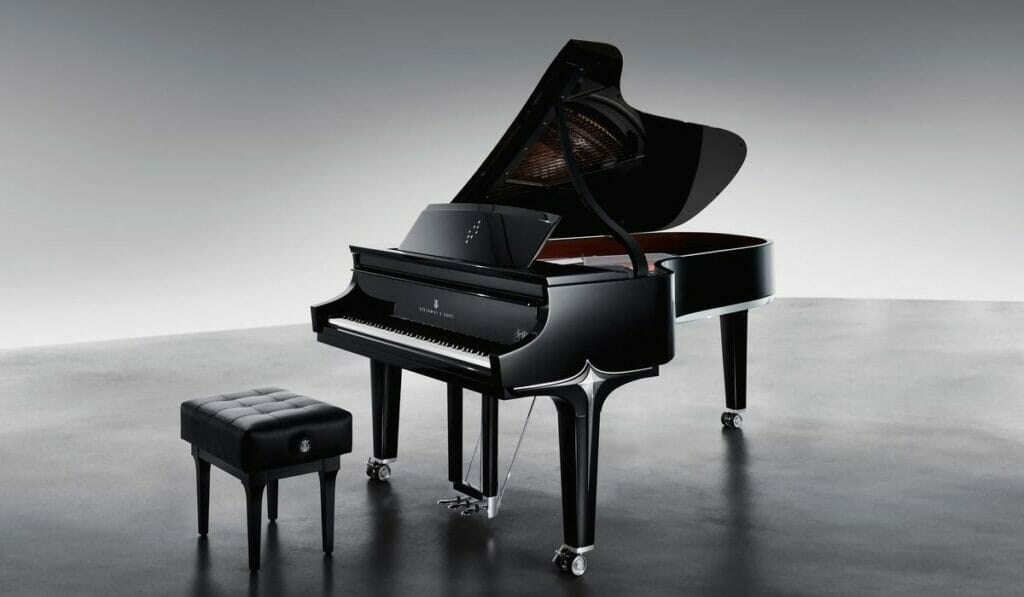 In the realm of high-end pianos, few makers come close to the reputation American company Steinway & Sons has. The 166 year-old piano manufacturer has patented over 100 innovations in piano-making, and works with some of the best musicians and designers to build their grand instruments.

Having a piece in your home adds gravitas and a healthy dose of culture (bonus points if someone’s around to play a nocturne or two on it); but having one of their recently-unveiled Steinway Black Diamonds is an honour unto itself.

Designed in collaboration with Chinese-born “virtuoso Steinway Artist” Lang Lang and renowned furniture designer Dakota Jackson, the piano is inspired by the rarity of its namesake gem. Availability for the instrument is equally uncommon, with only 8 Model D concert grand pianos; and 88 Model B classic grand pianos made.

Responsible for the piano’s striking metallic highlights and unique S-shaped topstick is Jackson, a longtime collaborator of Steinway whose furniture designs are displayed in places like New York’s Museum of Art and Design. Johnson also previously worked on Steinway’s Tricentennial Model A, a limited-edition model created to commemorate the 300th anniversary of the piano’s invention.

The Black Diamond comes built in ebony or Macassar ebony; with chrome detailing and an inscription of Lang Lang’s signature on each unit. Proving that there’s space for technology with an esteemed tradition like the grand piano, the Black Diamond is also equipped with Steinway’s Spirio R technology, which allows high resolution recording, and playback on your piano.

Don’t have magic fingers? The Spirio system includes a music library containing exclusive performances from classical musicians like Lang Lang, to jazz legends like Diana Krall – allowing for the player piano to perform pieces that make it seem like these musicians are right there in your living room.

The flagship Steinway Black Diamond Model D Piano is suited for professional and concert use, and has a projected price of MYR3.63 million.