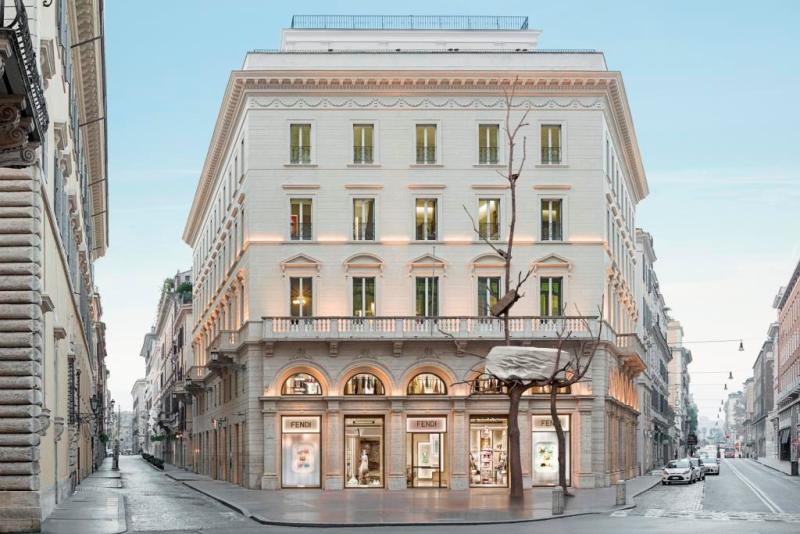 The sculpture Foglie di Pietra (Leaves of Stone) by Giuseppe Penone finds a permanent home in front of the Palazzo Fendi flagship boutique in Rome.
Wednesday, July 12, 2017 By Kirat

Traipsing through the winding streets of Rome, itâ€™s apparent that each structure is a work of art infused with centuries of history. Now, the heart of this ancient city, Largo Goldoni, welcomes a unique piece of art in the form of the Foglie di Pietra sculpture by Italian artist Giuseppe Penone. This intriguing piece is commissioned by FENDI in an endeavour to celebrates its own history and both the past and the future of the Eternal City.

Sprouting in front of the Maisonâ€™s headquarters, the sculpture is the first work of contemporary art to be permanently installed in a public space in Rome. Literally translating to â€˜Leaves of Stoneâ€™, Foglie di Pietra is a complex piece of two bronze trees interlacing their branches to lift hefty sculpted marble block 5 metres above the ground. Itâ€™s clearly a contemporary piece of art, but hints of Baroque Rome and the cityâ€™s history can be found with fragments of ruins inserted in the branches of the sculpture.

This unique form comes from the fertile imagination of Giuseppe Penone who is notably known for his involvement with the Arte Povera movement that took place in the late 1960s and early 1970s in Italy. His work has always been a fine example of the relationship between man and nature through the use of unconventional materials and the form of a tree.

To understand the creative thoughts of the Italian artist, Penone shares some insight to his work:

In which way do you choose the trees you work with? What is the process?

Since the first years and my first works in 1968, I started working in relation with nature and the growth of trees. One of my first works was based on the idea of blocking the growth of a tree with my hand. I substituted my hand with a steel and bronze cast that I grafted onto the tree, in a sense trying to oppose to it. It was a slight sculptural gesture. All of my works were developed starting from this first piece, from the relationship between man and what surrounds him and the change that a presence can create on the things that surround him and, vice versa, how the change of things that surround the man can influence a person. In that case, the work was based on the idea of time because the growth of the tree, that we can perceive as a solid being, becomes a fluid and pliable substance if considered in its growth in time. Moreover, from a structural point of view, the tree grows in concentric a circle. That is why we can find the shape of the tree inside its existing core: it memorizes its shape. Its shape is necessary to its life, so it is a perfect sculptural structure, because it has the necessity of existence. That is why I got interested in trees and developed a series of works considering trees not under a symbolic aspect, but under a real and material point of view.

How important is the idea of time in your work?

Time is surely very important, especially in a sculpture. You need time to elaborate a shape. You can have the idea, but you need an execution time to realize the work. And in the case of a bronze fusion process for example, time becomes much longer. The relationship with time is very interesting also for another reason: when we look at an object, the single look that we can cast on a landscape or on any other object, already belongs to the past. What we see already belongs to the past, and against this image, we have as our only reality the possible, uncertain, future: so past and future coexist. But then, if we consider language and its written and spoken expressions, you realize that humans mostly use the present tense. This is an illusion, a desire of the human being to live in the present. And if we consider an art piece, the intention of the artist is making his thought and his person present in time.

Does your work always start from an idea?

I usually start my work from an idea or from the material itself that can suggest an idea of work, there is no specific rule. The beginning of the work can be a drawing, something that I saw or a thought, but usually this idea is inserted in a thought that is somewhat pre-established. The other thing that I consider important and that still pushes me to use traditional techniques is the fact that I personally intervene in the realization of the work. Unlike many contemporary artists, when it comes to the construction of the work, I believe that the practice and the physical realization of the object with oneâ€™s own hands enable a comprehension of the material that would be impossible with the mind only. There is a pragmatism in the work that nourishes the work itself: it becomes content, otherwise the work would become dogmatic if it were to rely on the idea only.

What are your thoughts on fragility?

The fragility that you can find in a small tree branch is the same fragility of our existence. The rhetoric of strength is linked to power, but not necessarily to the intensity or to the reality of existence.

What is beauty to you?

Beauty is a consequence of logic. And when logic is the logic of existence, that is necessary to life, then beauty is perfect. Every tree has its own beauty because every shape of the tree is built for necessity: there is a logic, the logic of life, that makes aesthetically pleasing the shape of being. The same happens with people: every person is beautiful, but you can try and establish some standards or rules. You can see things under different points of view. The same thing happens for a sculpture or for a drawing: if you can find logic and the necessity of the idea or of the shape, then you have an aesthetics which is linked to necessity and thus becomes also beautiful. But, if you search for beauty as a purpose, you donâ€™t produce interesting art. Beauty is the consequence of a thought, not a consequence of substance or of shape.