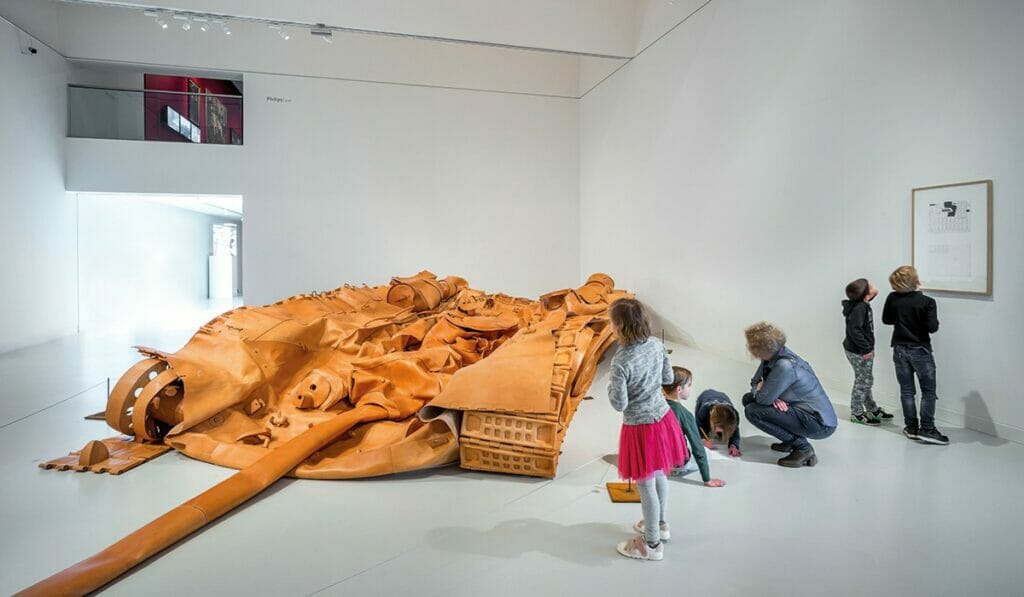 When Hong Kong’s newest museum for visual culture, M+, opens next year, visitors will be able to access for the first time the world’s most comprehensive collection of Chinese contemporary art covering the 1970s to the present.

Besides its importance in documenting the development of China’s art scene, the collection is also a complex commentary through the eyes of artists on the country’s dramatic transformation since it opened its doors to foreign businesses in 1978, just two years after the Cultural Revolution.

Take Ai Weiwei’s Whitewash (1995-2000), one of the works in M+’s collection. Comprising 132 Neolithic vases, a quarter of which is covered in white industrial paint, the work is a poignant statement on the clash between Western technology and Chinese culture as China opened to the world.

Or Wang Xingwei’s New Beijing (2001), a satirical oil painting referencing the 1989 Tiananmen student protests. Injured emperor penguins, a species foreign to China, stood in for the students who were gunned down, an indictment of China’s censorship and disowning of memories.

China’s evolution from communist to capitalist society provides ample material for artists as well. Civilisation Pillar (2003), by artist duo Sun Yuan and Peng Yu, is a clever take on China’s burgeoning capitalism and its excesses. A towering 4m pillar of solidified human fat weighing over one tonne, the pillar is an in-your-face criticism of the capitalist pathology of accumulating fat and disposing it, slimming down for example, as society grows affluent.

These works are all drawn from the M+ Sigg collection, named after the man who donated over 1,500 works valued at US$163 million (S$222 million) by Sotheby’s. Swiss national Uli Sigg is a businessman, diplomat, art collector and a visionary, in his decision to amass Chinese contemporary works decades before they became darlings of global auction houses. Artist Ai Weiwei calls him his “maker” and, indeed, Sigg was instrumental in nurturing artists and introducing Chinese art to the world. His collection is encyclopaedic, methodically accumulated over the course of two decades, from the mid- 1990s to 2012, with a curator’s eye to document China’s evolution. The process was not without peril.

MAN WITH A MISSION

At a time when contemporary art was deemed subversive, Sigg would venture into underground communities to connect with artists

He had this deflated life-sized tank sewn using luxury leather, inspired by the necessity of driving around ubiquitous Mao Zedong statues in China, as one would have to around such a vehicle.

The addition of industrial white paint on Neolithic vases highlights the clash between Western technology and Chinese traditions.

Sigg himself was the subject for many artists, including Zeng Fanzhi, Ai Weiwei, Zhao Bandi and Li Zhanyang.

A virtual city created online, the work tests the boundaries between virtual and physical existence.

PURSUING THE ‘FLESH AND BLOOD’

In a way, it is about being at the right place at the right time. Sigg’s long- standing affair with China began in 1979, when he led a delegation from elevator company Schindler to ink the first joint venture between a Western company and China. In 1995, he became the Swiss ambassador to China, North Korea and Mongolia. He is one of the few foreigners who had tracked China’s rapid transformation from Day One till today.

When he first landed in Guangzhou, he knew nothing of Chinese history, culture or languages. But Chinese culture fascinated him, with all its radically different answers to every question, from chopsticks to script. His love for contemporary art had developed earlier, when he was a law student in Europe and was drawn to what he called “the flesh and blood” in contemporary works. In China, he continued to pursue this interest, partly due to curiosity in Chinese realities beyond factory walls. In the 1980s, when contemporary art was deemed subversive and pushed underground, this meant furtive arrangements.

“I could not visit the artists at first – it was risky for my enterprise, for me and for the artist,” says Sigg. “I had to talk to middlemen, who then showed me photographs of what Chinese artists were doing. What I saw was unexciting – it was mostly derivative of Western art. But that was the beginning of autonomous art. China had been cut off from the world since the early 1900s. So its artists had to try all the things they were not allowed to, and only after they had swallowed all of the new developments could they begin to produce something of their own.”

By the 1990s, Chinese contemporary artists had begun to find their voice and Beijing was the nexus. Exhibitions were held underground – in the basements of newly built, unoccupied apartments and the backyards of artists’ homes. Oftentimes, he would set off in the late evening to visit them, after ambassadorial duties were done for the day. “The Chinese authorities were very tolerant of me and left me alone. In some way, they still held high regard for my earlier work in bringing Western industrialisation to China. I had given talks in New York, Berlin, Tokyo, persuading investors to come to China and showing them how it could be done,” Sigg says.

Over the years, he has visited some 2,000 artists and their studios. He muses: “To me, this was also about studying China, and art was a vehicle to do that. I got to access another Chinese reality outside official functions and industries. I met people in precarious living conditions, independent artists without any income. It led me to places I would have never gone.”

A LABOUR OF LOVE

“I was in the biggest cultural space in the world, and no one seemed to be paying attention to what the contemporary artists were doing. I knew that China’s ongoing transformation would be a very important period in Chinese history, and the art coming out of this transformation would be very important one day. So I set aside my personal taste, and chose the mission of collecting like a national institution should, to mirror Chinese art production across all media, along the timeline,” he says.

At a time when Chinese contemporary art was unknown to the Western world of curators and collectors, Sigg’s decision came across as foolish. He admits: “People in the West said I was crazy to put money into it and the artworks were not up to Western standards. In China, I was asked why not buy a decent piece of calligraphy, or shanshui painting? For the Chinese, there was nothing to be gained in patronising contemporary works, not money, not status.”

But his obsession stems from that of a researcher, not investor. “Would the artworks appreciate over time? That was just not my criterion,” he says. “When I changed my focus to collect as an institution should, I had decided to give the collection to China one day. I did not know when or to whom, but it was not for me to keep.”

His passion for Chinese contemporary art also led him to become a pivotal influencer in this world. In 1997, he established the Chinese Contemporary Art Award, the first of its kind, and brought international curatorial exposure to Chinese artists. He began hosting art parties to connect patrons and artists, coaching artists to talk about their works, and curating large exhibitions outside China. In 1999, Chinese contemporary artists were showcased for the first time in the Venice Biennale, thanks to Sigg, launching the careers of the likes of Ai Weiwei, Yue Minjun, Fang Lijun and Zhao Bandi.

His image became part of Chinese contemporary artworks, such as Ai Weiwei’s Newspaper Reader (2004), and numerous portraits by artists such as Zhao Bandi and Zeng Fanzhi.

The increased visibility also brought about an exponential appreciation of Chinese works. “By the 2000s, Chinese collectors had also joined the game. But I was very well-known to the artists as someone who took a serious interest in them, who helps and advises them. So they gave me a very different price for their works,” he says.

Also, as the artists knew that he was not collecting to sell, they would often give him their best pieces. “I could not have built the collection otherwise. Today even with lots of money, it would not be possible. The material is just no longer available.”

To Sigg, the collection would be meaningless if it does not return eventually to China. “Returning the works allows the collection to develop its full meaning, in its own culture, to a wider audience. Contemporary art is maybe the most immediate way of diving deep into a society. In a society such as China where the media cannot openly report, contemporary art gives the best insights. Of course, you could read a hundred books, but no one would do this.”

In 2012, when he finally donated the bulk of his collection to M+ after talks with Beijing and Shanghai fell through, the reaction was mixed. China’s art bloggers and news channels were highly negative. The fact that M+ offered to purchase part of the collection for US$22 million added fuel to the fire.

The criticism was not new to Sigg. He says: “When I created the art award in 1997, there were those who accused me of trying to dictate what art should be in China. I was prepared to give the collection to China, but we could not come to an agreement. Though I do not feel the same kind of commitment to Hong Kong, it is at least on Chinese soil, and it is more likely that the works may be exhibited openly.”

Giving the works away was not without some angst, given his relationships to many of the pieces. Whitewash is an example. “I was a part of this clash of civilisations embodied in the work,” says Sigg. “I brought the model of Western capitalism and new technology to China. To me, this has a very personal connotation.”

Today, Sigg is regularly featured in talks and conferences with a Chinese focus, and shares on topics ranging from China’s soft power to diplomacy through art. His collecting journey was documented in the 2016 film The Chinese Lives of Uli Sigg by Michael Schindhelm. Collecting and research remain in his blood, but the burden and urgency of creating a historical record have finally eased.

“I’m a very old man now,” he says. “It is very difficult to unlearn the collecting. Now, I collect according to my own taste, in a different rhythm, for pleasure.”