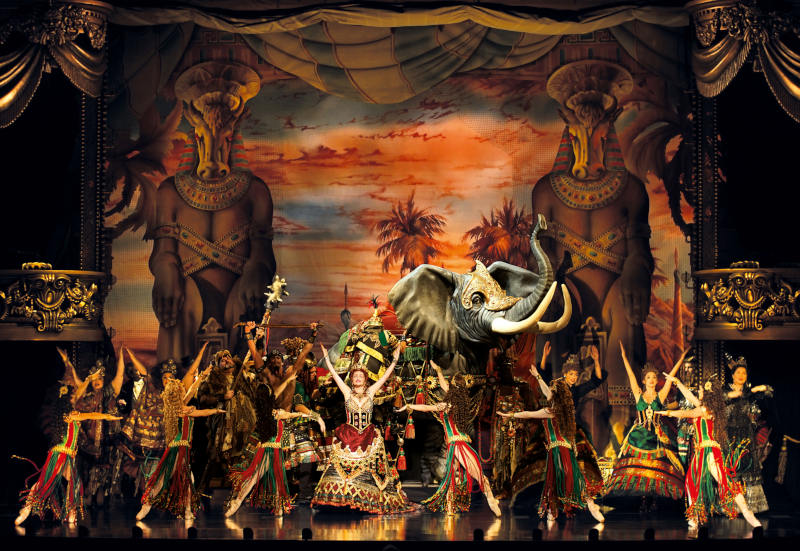 Walking through the back entrance of The Theatre at Solaire Resorts and Casino was a surreal experience, as we moved away from the smoky streets of Manila into a dark hallway that led straight into the wings of the theatre. What greeted us as we passed through the threshold into the backstage area were rows of boxes filled to the brim with costumes, tables of props (including a silver platter containing a very convincing roast suckling pig) and all manner of things occupying the space in every direction. We were taken through the wings and labyrinthine backstage area, all the while getting glimpses of the puzzle pieces that will all come together to form the wondrous live experience of The Phantom of the Opera. Andrew Lloyd Webberâ€™s The Phantom of the Opera is Broadwayâ€™s longest running musical, and the second longest on the West End. The show first opened in 1986 on the West End, and has since enjoyed more than 13,000 performances on Broadway and is set to keep mesmerising audiences for years to come.

This touring company is led by Assistant Director, Rainer Fried, who I spoke to while in Manila. â€œWeâ€™re so excited to finally be playing in Kuala Lumpur!â€ he says . This isnâ€™t Friedâ€™s first world tour with The Phantom, he previously headed two Asian touring productions as well as worked on many others in cities all across the globe.

â€œKL has been on our plan for so long, but the physical requirements of the show was always too big and complex previously,â€ he continues. â€œWith the set we have on this tour, itâ€™s much more self contained so we donâ€™t depend quite as much on the local infrastructure. Especially supporting a piece of scenery like the chandelier, [this set has] greatly reduced the challenge, though not eliminated it, and itâ€™ll hopefully make things easier as we tour and go to different theatres.â€

Be prepared to experience the familiar halls of Istana Budaya as youâ€™ve never seen it before, as the majestic and incredibly detailed set transports you straight to the famed Paris Opera House. Watching the set in action, with pieces like hanging walkways, a life-sized elephant and spiral staircases seamlessly moving in and out of stage, thereâ€™s no other way to describe the show than a technical marvel. With 22 scene changes, almost 300 costumes, 250 kilograms of dry ice and 281 candles used, The Phantom of the Opera is more than a compelling love story, with the lights, sounds and stage playing the biggest part in keeping audiences immersed.

When asked what itâ€™s like to bring a complex show like The Phantom on tour, Fried puts it all down to having a great team. â€œWe have an incredible group of people here, not just onstage but offstage too. Itâ€™s an extremely complicated show with set pieces and costume changes that have to be ready to the second, and itâ€™s all down to the people who know what theyâ€™re doing and are committed to it.â€ The 2019 world tour will make history for local audiences, as this will be the first time The Phantom of The Opera will be performed in Kuala Lumpur. Set to open for local audiences on the 15th of June, the tour brings a veritable tour de force of musical theatre to our shores. With a diverse cast originating from all over the globe and auditioned especially for the world tour, Malaysians can expect no less than the true blue Phantom experience right from their historic seats in Istana Budaya.

Tickets for the Kuala Lumpur leg of The Phantom of the Opera are on sale now (and selling fast!) at ticketcharge.com.my.