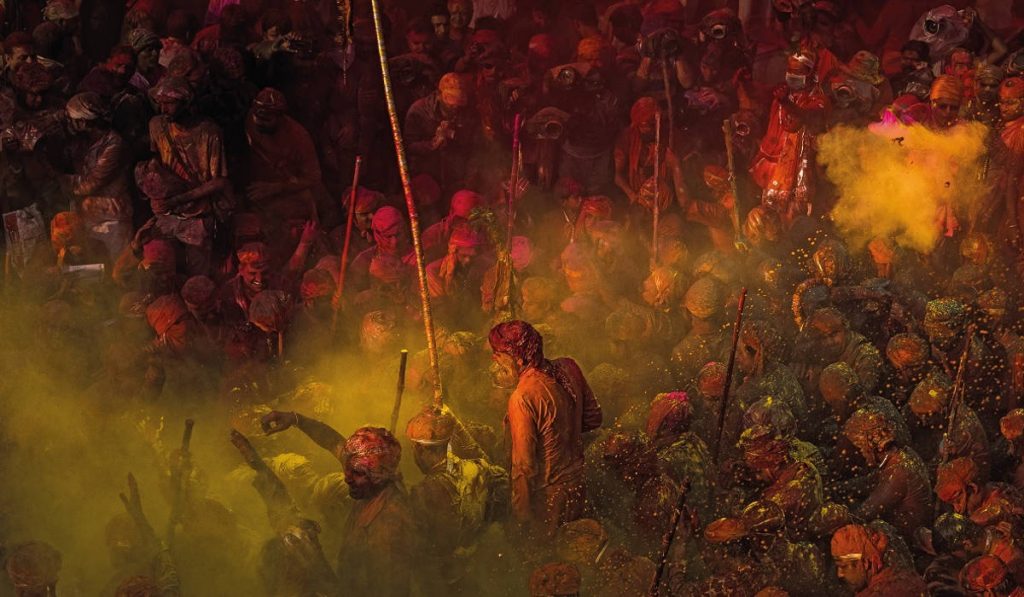 When the self-taught photographer retreats from a cushy life in Singapore, it’s to seek out raw human emotions.
Monday, January 29, 2018 By Editors

There’s a dreamy photo of Laxmi Kaul standing in waist-high river water. The early evening sun casts a soft glow on her face and she’s looking contemplatively into the camera, arm wrapped around a pole. What the picture doesn’t show is that she is gripping it in distress. Kaul is deathly afraid of water and had the photo taken to make a point to women everywhere: Face down your fears.

If the camera had zoomed out, viewers would have seen that there’s more to the story than beating a phobia. It was 2013, and Kaul was alone in the city of Allahabad to document the religious festival Kumbh Mela. She was surrounded by men in trances; naked, white-powdered men with their bits dangling out; men with swords up their privates. And snakes – there were plenty of snakes slithering around the necks of devotees wanting to emulate Lord Shiva. All this the self-taught photographer took in her stride, save for the night she feared for her life. The crowd was consumed by spiritual frenzy, with tripped-out men surrendering to chaotic abandon. Yet she stayed, and got her shot.

You can say that Kaul’s spunk is her access card. There’s the time she snapped a portrait of the Dalai Lama after a security guard mistook her for a journalist. She was queuing with other members of the press in a flak jacket, three cameras hanging off her small frame. “It works, shut up,” Kaul recalls telling herself. Sometimes you have to seize the opportunity.

Then there’s the time when she, frustrated at being stuck behind a military convoy on a winding road from Ladakh to Srinagar, left the car to walk. She ran into nomads and the serendipitous encounter led to a two-year project documenting life in the villages bordering Kashmir.

“Kashmir has always been labelled as this violent, scary area,” Kaul says. “But the people are so warm and welcoming. There’s not one house I went into that did not off er me food, tea, a night’s stay – because it was not safe to be out alone. The military could come out of anywhere. How can you not fall in love with them?”

Although she’s been shooting professionally for 12 years, the Kashmir images formed her first exhibition, Beyond Boundaries, in 2016. All 31 photos were sold. She exhibited again last October as part of the Celebration of Photography showcase at Ion Art Gallery. The subject was the Holi festival of colours.

VIVID SYNTHESIS OF HUMANS AND EMOTIONS

The magical and colourful festival of Holi when people get together and sing praises to Lord Krishna. The festival also celebrates spring, fun and love.

Kaul says she gravitates towards portraiture, but, as much as she invests in making her subjects comfortable, she has her eye on the larger picture.

“Somebody asked me at a press conference following Beyond Boundaries which were my best pictures. It’s the ones I never took. I am so busy enjoying the moment, I don’t need a photograph.”